Leeds and Southampton 'interested in signing Birmingham youngster George Hall, 17, this summer' after the versatile teenager impressed as a holding midfielder for England U18s back in December 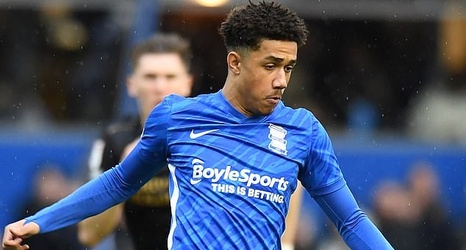 Birmingham City prospect George Hall is attracting interest from Leeds United and Southampton ahead of a potential summer transfer.

The highly-rated 17-year-old was given his first team debut against QPR back in January when manager Lee Bowyer utilised him as a number ten playing off striker Troy Deeney but is capable of playing in numerous positions.

Coaches and scouts saw him play as a holding midfielder for England during a tournament in Spain in December and that versatility plus game intelligence is continuing to attract suitors.

Despite the England U18 international only signing his first professional contract in November, a two and a half year deal, that has failed to deter interested parties keen to snap up a youngster who has plenty of potential.