USF’s Corrick Named The American Pitcher of the Week 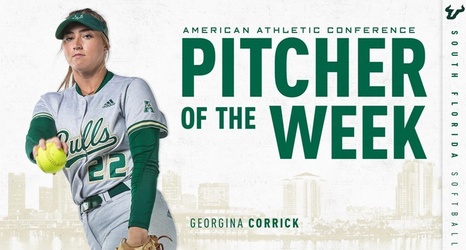 TAMPA, FLA. Feb. 24, 2020 – Junior pitcher Georgina Corrick was named The American Pitcher of the Week, the conference announced Monday. Corrick went 4-0 over the weekend, pitching two complete games and six innings of a no-hitter on Friday. Brooke Hartman also was named one of the AAC's Honor Roll selections for her efforts in the weekend sweep.

Corrick (Sanford, Fla.) opened the weekend on Feb. 21 with six strong innings in a 7-1 win over FIU, where she surrendered no hits and struck out 11 batters. With Vivian Ponn, she combined for USF's 27th no-hitter in program history.