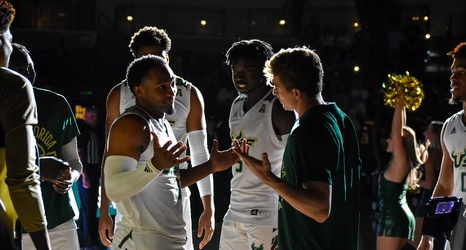 Having eight days to stew on a 17-point loss to IUPUI, USF men’s basketball returned to the Yuengling Center court with a purpose on Thursday and tamed the visiting Wofford Terriers for a 69-55 victory.

USF (2-2) came out firing from the field, shooting 82 percent through the first 10 minutes of action and knocking down four of their first six threes.

Leading that first half charge was junior guard Justin Brown, who scored eight of the Bulls’ first 10 points out the gate. Later in the half, the Atlanta native capped a 12-0 Green and Gold run with back-to-back treys, the latter as part of a four-point play, to push their growing lead on Wofford (2-4) out to 19.