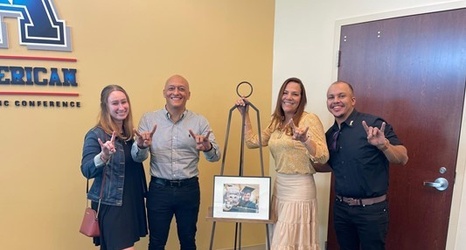 And it will serve as a reminder of the impact made by the late Milton Llinas, perhaps the most beloved Rocky of them all.

The "Rocky Room'' was unveiled this fall in the Selmon Athletics Center during a luncheon to honor Llinas (pronounced gee-nus), a former USF student whose indomitable spirit was personified by his 3-year portrayal of Rocky. Llinas, a former Student Government senator and chief justice, died in 2018 after battling leukemia. He was 23.

"We will never forget Milton, a truly special kid,'' said Steve Greenbaum, a USF donor who endowed a scholarship that will go to future students who portray Rocky.