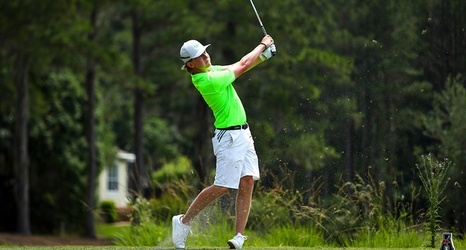 BROOKSVILLE (April 24, 2021) – The USF Bulls concluded round two of the American Athletic Conference Men's Golf Championship on Saturday just as they had after Friday's opening round – sitting atop the leaderboard. On a gusty afternoon at Southern Hills Plantation Club, the Bulls shot four-over-par 292 to maintain an 11-shot advantage in the chase for their fifth conference title.

USF is 14-under after 36 holes, followed next by SMU at three-under. Wichita State is at even par after posting the best score of the day on Saturday – nine-under-par 279. Wichita State and SMU were the only two teams to shoot under par in round two.