Will Muschamp Responds, Frustrated By "Liar" Accusation By #1 Prospect's Mother 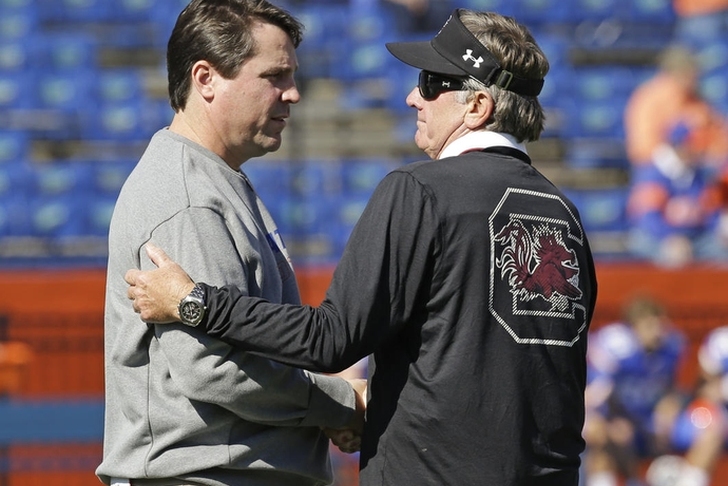 On Sunday, the mother of #1 2016 recruit Rashan Gary, Jennifer Coney, put new South Carolina Gamecocks head coach Will Muschamp on blast, calling him a "pure liar" and running him down for misleading her son about his intentions to stay at Auburn.

The former Tigers defensive coordinator responded on Monday, detailing his frustration with Coney's public haranguing of him:

"I was perfectly content and very happy working with Gus Malzahn for a long time. Then when somebody calls you about a head job in the SEC, at the University of South Carolina, it certainly will appeal to you."

Muschamp says he was first contacted by South Carolina on December 3rd, making his decision to take the job public just three days later. He added that he did speak with Gary's mother on Monday, and it appeared that she "understood" his perspective on the matter.

Auburn remains a contender for Gary signature, although his mother expressed reservations about the entire Tigers' operation in the wake of Muschamp's departure.

"I don't know," Coney said. "I'm in the business world. If you bring representatives to me and one of your representatives tells you a blatant lie and almost immediately you find out they're lying, well, what does that say about your organization? I'm not saying anything bad about Auburn. I like Auburn. I can see my son at Auburn. But these things happen for a reason."

Coney told reporters that Tigers head coach Gus Malzahn expressed that he was "blindsided" by Muschamp's decision, although he did express a level of understanding about his former DC's move.

"I knew eventually he wanted to be a head coach," Malzahn said Monday. "Will worked extremely hard did a very good job for us. I'm happy for him. That's what he wanted and I expect him to do well."

A 6-foot-5, 293-pound defensive tackle out of Paramus, NJ, Rashan Gary has 30 scholarship offers on the table. Current projections have the Michigan Wolverines out in front for his pledge, with both Alabama and Auburn trailing behind.