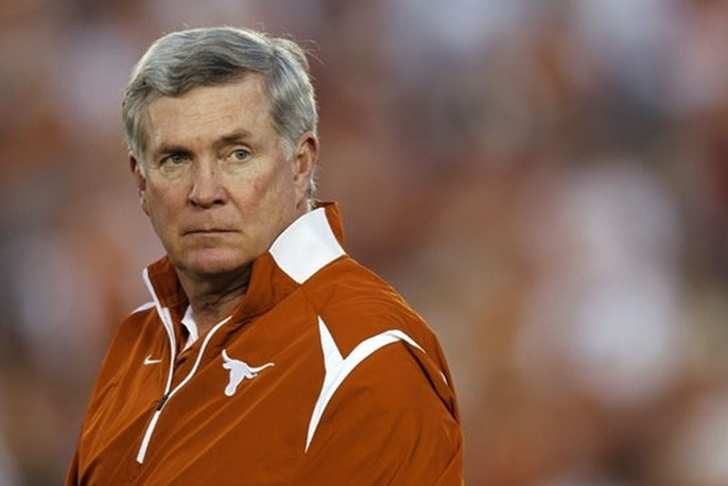 The South Carolina Gamecocks find themselves looking for a new head coach for the first time in 11 years after Steve Spurrier announced his resignation/retirement from college football this week, and several candidates have already emerged.

Alabama defensive coordinator Kirby Smart and Houston head coach Tom Herman are considered to be the leading candidates for the job, but former Texas head coach Mack Brown told the Paul Finebaum show that he wants to be considered for the job:

"I'd love to talk to them & see if the fire is still there, but I haven't had that call yet" - Mack Brown on the South Carolina coaching job

That is, quite frankly, a bad idea.

South Carolina's last two head coaches, Lou Holtz and Spurrier, were 65 years old and 60 years old, respectively, when they were hired, viewing the opportunity to rebuild the Gamecocks program as a low-pressure retirement job. While that was true when Holtz was hired in 1999 and Spurrier in 2005, that is no longer the case in 2015.

The Gamecocks had only three winning seasons in the 1990's, won just one game in the 1998 season, and didn't win a single game in Holtz's first year, showing just how downtrodden the program was.

They was an also-ran. An easy victory. A program that needed something to become relevant.

The brand name "Lou Holtz" gave South Carolina that relevance they so desperately craved, and he decision paid off as he built them from a winless team to a 6-5 bowl team in his last season in 2004.

However, he also left the program on three-year probation for non-voluntary summer workouts and impermissable tutoring, and many thought the program would regress back to one-win seasons.

That caused the need for relevance and credibility to still be very much alive, which made Spurrier the perfect candidate. Many questioned why Spurrier was taking over a "hopeless" program - so much so that ESPN College GameDay's Lee Corso stated that South Carolina would never win the SEC.

The Head Ball Coach struggled to take the SC program any further that seven wins during the probational period, but he kept them from falling back into obscurity. Then, the tide started to turn.

South Carolina upset No. 4 Ole Miss in a Thursday night primetime game in 2009, the program's first win over a top-5 team in nearly 30 years. Next came their upset over defending national champion No. 1 Alabama, snapping the Tide's 20-game win streak and giving the program their first ever win over a top ranked team.

Suddenly, the Gamecocks were relevant on the national stage. They won the SEC East that year, then reeled off three straight 11-win seasons, beat in-state rival Clemson five times in a row, and had the longest home winning streak in the county.

Finally, South Carolina had reached the relevance and credibility they have so craved, and even despite a disappoiting 7-6 record last year and a 2-4 mark this year, they still have it. The quest for headlines and respect is over.

Which brings us to Mack Brown.

However, many think he doesn't have much left in the tank and has trouble identifying top prospects (after all, he didn't offer a scholarship to Andrew Luck, Johnny Manziel, Jameis Winston, or Robert Griffin III, all of whom wanted to go to Texas) and relating to his players, which is why he was eventually let go as the Longhorn's head coach in 2013. Don't forget, Charlie Strong is currently cleaning up his mess in Austin.

Plus, who knows how much Brown has left in the tank? As Spurrier said in his farewell press conference, recruiting is the lifeblood of college football, and he felt the questions about his future was really hurting South Carolina's recruiting efforts. Brown won't help that.

Brown is a Hall of Fame coach, but it's clear that he's past his prime as a pure coaching candidate. All he can offer the Gamecocks now is his name - but South Carolina doesn't need that anymore. The program has prestige on its own.

What the South Carolina program needs is a proven young coach that will inject life into the program, not another coach looking for a retirement job.

It's time for the Gamecocks to look to the future. Being "good enough" is no longer good enough, and they won't be anything but that with Brown at the helm.