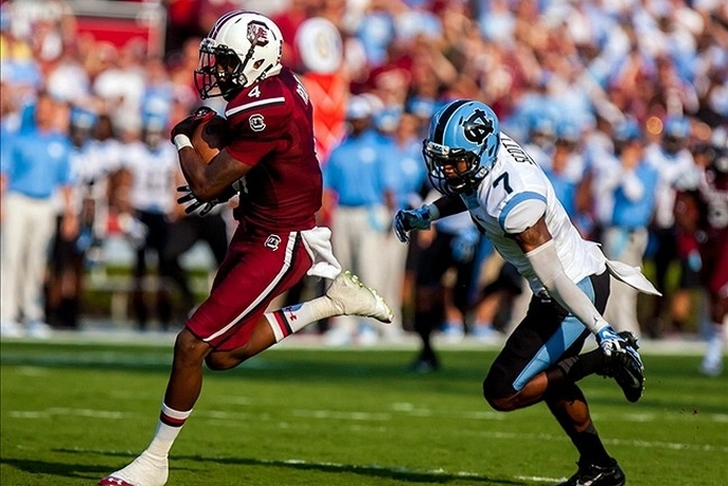 The 2015 college football season kicks off tonight in Charlotte, NC when the North Carolina Tar Heels square off against the South Carolina Gamecocks. Both teams have expectations of rebounding from disappointing 2014 seasons and want to get their seasons off to a strong start with a victory over another talented major conference team.

North Carolina had a disappointing 6-7 season in 2014, and head coach Larry Fedora is starting to feel the pressure to compete at the top of the ACC. Senior QB Marquise Williams is expected to have a breakout season after passing for over 3,000 yards and 23 touchdowns while rushing for 788 yards and 13 more touchdowns. With 17 returning starters - including 10 from an offense that ranked in the top third of the country last season - the time is now for the Tar Heels to take the next step.

South Carolina has as many question marks surrounding them as any team in the country. Wide receiver Pharoh Cooper is one of the best players in the country and running back Brandon Wilds is a productive, experienced running back, but that's where the certainties stop. Sophomore Connor Mitch was named as the starting QB this week, but don't be surprised if Spurrier uses two (or even three) quarterbacks. The defense does return eight starters, but they were one of the worst in the country last year. That brings us too...

What to watch for: Have the defenses improved?

The offenses are clearly the strengths of these two teams, but whichever defense can play better will determine who wins this game.

Both offenses should be able to put up a good number of points, making this one a real toss up. However, South Carolina has much more pure defensive talent than UNC, and I expect them to be able to limit the Tar Heels enough for the Gamecocks to pull out the victory.