The Gamecock women finally have their statement win 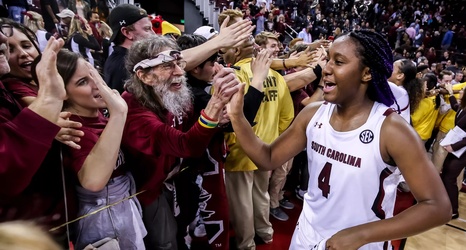 On Monday night, it finally all came together for the South Carolina Gamecocks women’s basketball team.

For the first time in eight tries, the invincible Connecticut Huskies — who have long cast a deep, impenetrable shadow over other, would-be contenders in women’s basketball — came away on the losing side of a matchup with the Gamecocks.

And what an emphatic, cathartic victory it was for South Carolina: USC dominated the fifth-ranked Huskies 70-52 in a game that featured a stunning 2-point (yes, two) first quarter from UConn and was never truly in doubt, the sell-out crowd roaring deliriously with every basket.