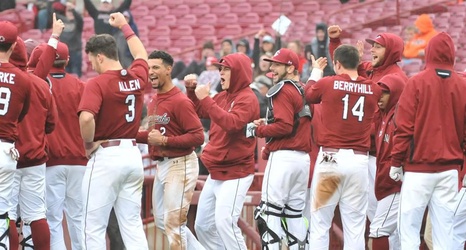 After the first two games in the series against Mississippi State ended in blowouts, it was hard to foresee game three going very well for South Carolina, but the Gamecocks came through in the end, beating the Bulldogs to salvage the series and lock up a trip to Hoover for the SEC Tournament.

USC got on the board first, taking a 1-0 lead in the first inning thanks to a two-out home run from Andrew Eyster. MSU tied things up in the third on a leadoff homer by Justin Foscue. The tie didn’t last very long though, as the Gamecocks regained the lead in the next inning.