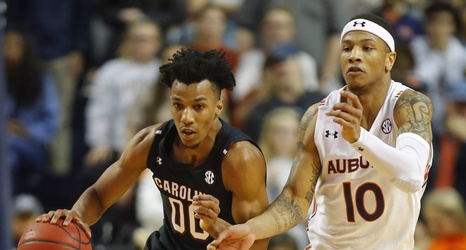 The up-and-down rollercoaster of South Carolina’s basketball season continued on Wednesday night, with the Gamecocks taking a deflating 80-67 loss on the road to the No. 16 Auburn Tigers.

South Carolina was riding a two-game winning streak that featured a buzzer-beating victory over a top-10 Kentucky squad and a dismantling of Texas A&M on the road. Auburn, which had climbed as high as fourth in the polls, was in a two-game slump after its offense was a no-show against Florida and Alabama. Unfortunately, the Gamecocks couldn’t take advantage, as the Tigers found their stroke from 3 — shooting 37% from distance — and kept South Carolina safely at arm’s length.