Scouting Report: Each Team's Biggest Threat to the South Carolina Gamecocks' Defense in 2015 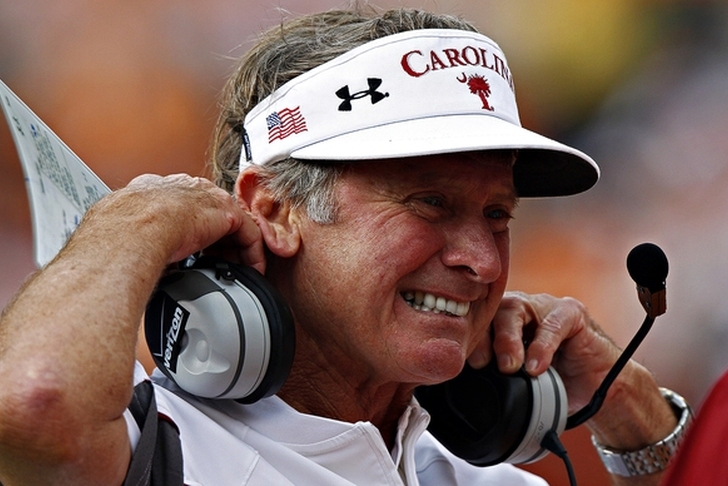 Let's face it, South Carolina's defense wasn't as strong as fans expected it to be in 2014. In fact, poor defense forced the Gamecocks to blow double-digit fourth quarter leads in three-of-six losses. Steve Spurrier attempted to address South Carolina's defensive woes by hiring his former colleague from Florida, Jon Hoke, as co-defensive coordinator alongside Lorenzo Ward. The Gamecocks have a difficult schedule, as always, in 2015, and here's the biggest threat from each team that South Carolina will have to contain:

Williams is the top returning player for the Tarheels and is a true dual-threat quarterback. He finished 2014 with the second-most completed passes in the ACC and threw 21 touchdowns with nine interceptions. Williams also threw for over 3,000 yards and led the Tarheels with 783 yards on the ground.

The Tarheels' offense will be a tough task for a defense that's trying to find a new identity in 2015. The Gamecocks will have to maintain tight coverage on the North Carolina receiving corps while creating pressure to disrupt Williams. Williams completed 65.6% of his passes in the Tarheels' six wins last season, while completing only 59.4% in their seven losses. South Carolina will have to feature depth and create turnovers to completely contain the Tarheels' fast-paced offense.

Towles orchestrated the Wildcat Offense to 447 yards against the Gamecocks, which was the third-best performance for Kentucky against all SEC teams. He threw for 2,713 yards and 14 scores. Towles also added 303 yards and six touchdowns on the ground. It's very possible that Towles could lead the SEC in yardage this season, and he'll have plenty of returning weapons to help him along the way.

South Carolina will need to find a way to exploit Towles by pressuring him in the pocket and rushing his decision-making ability. The Gamecocks will have to prove that they can keep their offense on the field and not give Towles and the Wildcats any hope of pulling off the upset in Columbia, where Steve Spurrier has never allowed Kentucky to leave victorious.

This pick is a no-brainer, as Chubb stands high on many experts' Heisman Trophy radars going into the 2015 season. Chubb was phenomenal last year in the games where star player Todd Gurley was either hurt or suspended. Plus, he gets a lot of help from an experienced offensive line, and Georgia has more depth at running back than 95% of teams in the FBS.

South Carolina will have expose whoever will be taking snaps for Georgia at that point in the season and outduel Georgia's experience on the offensive front. The Gamecocks used a lot of clock in their 2014 38-35 victory over Georgia and that strategy must be implicated again this year in Athens.

Holman comes into the 2015 season as the top signal-caller for the Golden Knights. He's a junior with nice size at 6'4" and 213 pounds and fits George O'Leary's scheme very nicely. The Golden Knights come into Columbia to complete a home-and-home series with the Golden Knights, after South Carolina foiled Central Florida's chance at perfection in 2013. That being said, the Golden Knights have got to have this game circled on their schedule for this season.

The Gamecocks will have to be ready to stop a sophisticated, pocket-passer style that Holman brings to the table. Even though Holman lost his top target in Breshad Perriman to the NFL Draft, the Golden Knights have proven the last few seasons that they can generate and recruit talent to come to Orlando. This should be a great duel between Steve Spurrier and George O'Leary and could prove to be one of the best non-conference match-ups of the 2015 season.

While Hansbrough didn't exactly rack up the yards against the Gamecocks last season, he proved to be an extremely effective runner in the red zone by posting three scores against the South Carolina defense. This allowed the Tigers to leave Williams-Brice Stadium with a one-point victory, and Steve Spurrier's team was knocked out of the top 25 for the first time in a long time.

The 2014 meeting between Missouri and South Carolina led to the Gamecocks' second-loss of the season, and the game was the first of three fourth quarter meltdowns for the Gamecocks' defense. Hansbrough only rushed for 43 yards in this game, but he was able to score two clutch touchdowns in the last seven minutes of the ball game to leave the Gamecocks' faithful with a very bad taste in their mouths. The solution for South Carolina against Hansbrough is simple: don't let him make the momentum-changing runs that he made in 2014. With the departure of Missouri's 2014 leading receiver Bud Sasser to the NFL Draft, Hansbrough will certainly be tossed a bigger role in this year's "Battle of Columbia."

Fournette, like Georgia's Nick Chubb, comes into his sophomore season as a potential Heisman Trophy candidate. Fournettes is a big back, standing at 6'1" and 230 pounds and has really impressed a lot of NFL Scouts. He will be featured heavily in Les Miles' offensive scheme this season, as the Tigers' will depend on a lot of youth at quarterback in 2015. LSU returns three starters on their offensive line to help lead the way for Fournette.

The Gamecocks' biggest advantage is that they meet LSU in the second week in October, allowing South Carolina's defensive coaches to at least observe some of the Tigers' tendencies on offense. South Carolina will have to use that knowledge to develop a plan that will allow them to creatively to control the line of scrimmage, especially late in the second half if this game is close.

Webb proved to be the Commodores' most dependable asset on the offensive side of the ball during a Vandy's dismal 2014 season. The Commodores go into 2015 with a lot of question marks, specifically at the quarterback position after Patton Robbinette decided to end his football career due to injuries in late-March. Webb will be the centerpiece of Vanderbilt's offense and is another sophomore running back that will turn heads in the SEC this season.

South Carolina did a fairly good job of defending Webb last season, only allowing him to rush for 97 yards on 19 attempts. However, the Gamecocks will have to be vigilant of Webb's ability to find a way to make plays as the Commodores' quarterback in their wildcat package, where he found most of his success against South Carolina in 2014.

Reynolds was instrumental for the Aggies in their blistering of South Carolina in last year's season opener. He's got a good frame at 6'4" and is listed at 190 pounds. Reynolds will be true sophomore Kyle Allen's most dependable target in 2015, after catching 13 touchdowns in 2014. He'll be the premier target in Texas A&M's pass-heavy offense.

The Volunteers are a very trendy pick by many experts to win the SEC East in 2015, and Dobbs has the potential to make himself an All-SEC selection by the end of the 2015 season. Dobbs was thrown into the fire in 2014, making his first start against eventual SEC Champ Alabama. Tennessee Coach Butch Jones made the decision to start Dobbs after the Vols were pummeled 34-3 the week before in Oxford, Mississippi against Ole Miss. After losing to the Crimson Tide, Dobbs led Tennessee to four victories in the Vols' last five games, dropping only one game to the Missouri Tigers.

South Carolina will have to play four complete quarters against Dobbs on defense this time around in 2015. The Gamecocks don't get the luxury of facing the Vols at home this season and will have to cope with the stress caused by the intensity of Neyland Stadium. Dobbs is very good at managing Tennessee's offense, and the Gamecocks will have to finish strong in this game to prevent a repeat of 2014, where they allowed the Vols to sneak away from Columbia with an overtime victory.

Robinson returns as the Gators' leading pass-catcher from 2014 and was the only Florida receiver to finish last season with over 500 yards receiving. The junior comes into 2015 with a chance to determine to NFL Scouts what his stock will be, if he decides to enter the NFL Draft after this year's season. That Gators' offense is surrounded with question marks at the quarterback position and various spots on the offensive line. First-year head coach Jim McElwain will have to find a solution to resurrect an offense that was the worst "The Swamp" has seen in quite some time.

South Carolina must take advantage of the Gators' offensive line that will have four new faces starting in week one. The Gamecocks will need to use pressure against these new starters to create mistakes from whomever will be the starter for Florida at that point of the season. South Carolina will also have to be productive on offense, and not allow the Gators defense to keep Florida in this game in mid-November. 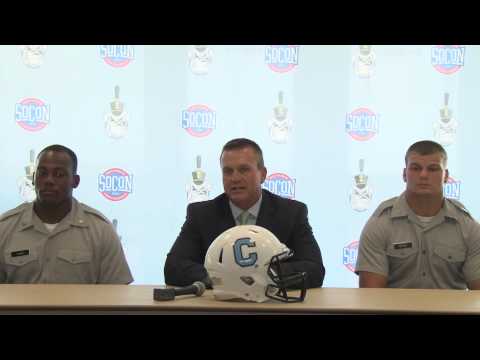 Renew is the top returning rusher for the Bulldogs, who utilize a triple-option attack on offense under second-year head coach Mike Houston. Renew is listed as a "B-Back" on the Citadel website and finished 2014 as the Bulldogs' second-best rusher behind departing quarterback Aaron Miller.

The biggest worry for South Carolina here is the Bulldogs' unique offensive attack. The Gamecocks will only get a week to prepare for the triple-option and will have to play the Bulldogs with a lot of discipline along with an intense focus on assignments that will be instrumental for their success. The Citadel comes to Williams-Brice Stadium as South Carolina's annual in-state opponent other than their obvious rival with the Clemson Tigers.

Watson was a super freshman for Clemson last season, despite battling through some pretty troublesome injuries. After defeating South Carolina in the final game of the regular season, it was revealed that Watson actually beat the Gamecocks with a torn ACL ligament in his knee. He enters the season as a dark horse Heisman Trophy candidate, and the Clemson offense was adversly more effective under his leadership.

The Gamecocks will have to implement a similar gameplan that allowed them to be successful against the Tigers for five consecutive seasons, which ended last season after losing to Clemson in Death Valley. South Carolina was able to limit the opportunities for Clemson by utilizing an offensive gameplan that exercised long, sustainable drives that exposed Clemson's defense and limited their offense to a minimal amount of plays and time of possession. "The Battle of the Palmetto State" will surely be an exclamation mark at the end of what should be interesting seasons for both schools.

The Gamecocks don't get the benefit of a soft schedule this year, but they have the ability to compete in all games that make up a tough schedule week-to-week. It will be interesting to see what a year of experience along with the addition of Jon Hoke will provide for the Gamecocks, after struggling on defense in 2014. As always, thanks for reading and be sure to follow me on Twitter @griffaldo.