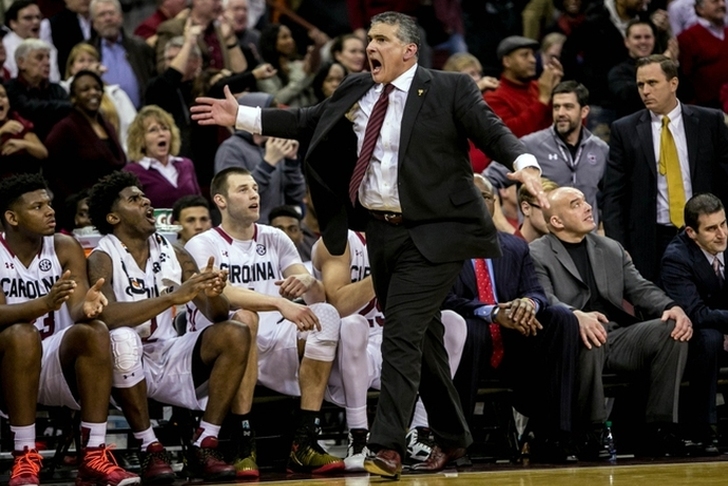 The South Carolina Gamecocks were one of the several bubble teams left out of the NCAA Tournament this year, becoming the first Power 5 conference school to win 24 games during the season and not make the Big Dance.

Head coach Frank Martin said his team was "hosed" by being left out of the tourney, but not because he thought they deserved to get in - he was actually told by the NCAA that they'd be in the tournament.

According to NOLA.com's Ron Higgins, a NCAA official called South Carolina on Selection Sunday to let them know they had been selected, then never called back when they were left out.

"Sources told me that the person that makes the travel arrangements for NCAA tournament teams had actually called South Carolina, told the Gamecocks they had been invited, then said to hold on and they would call back in 10 minutes.

"South Carolina never got the return call. Vandy got the NCAA bid and then promptly lost by 20 points to Wichita State in one of the tourney's First Four games in Dayton."

South Carolina athletics director Ray Tanner confirmed the report, saying a NCAA official called them around 6:30 p.m. on Selection Sunday to invite them to the tournament.

“Unfortunately, during the selection show a junior men’s basketball staff member mistakenly sent a text to a member of the University of South Carolina athletics department staff via an app we used for the first time during the 2016 tournament. The text was supposed to go to all teams, congratulating them for making the tournament. Regrettably, a text meant for another institution went to South Carolina instead.

"While the Gamecocks were given serious consideration, at no time during the selection process was South Carolina voted in to the field. Ultimately, they were one of the last four teams left out of the tournament. I take full responsibility for this clerical error and apologize to Coach Martin, his staff and team, and the entire University of South Carolina community.”

The Gamecocks ended up being a No. 1 seed in the NIT, losing at home in the second round to Georgia Tech. South Carolina hasn't made the NCAA Tournament since 2004.

Vanderbilt finished with a 19-13 regular season record before losing to Wichita State in the First Four. Head coach Kevin Stallings was thought to have saved his job by making the NCAA Tournament, but he left the school last week to take the head coaching job at Pitt.