Why I've Got Jadeveon Clowney's Back, No Matter What 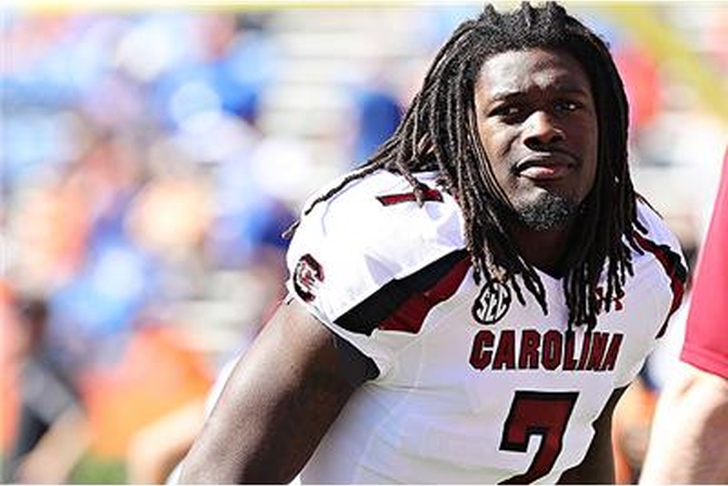 This year has been an incredible, 10-win season for the South Carolina Gamecocks and Junior Defensive End Jadeveon Clowney. Clowney has been popping pads and getting personally acquainted with quarterbacks and running backs all year long, minus a few games. He's been battling the same injury that my father is battling, which people say is nothing major. My dad acquired that injury running a marathon. Billy Griffin also tells me it's one of the most painful injuries he's ever had, and this was a man that took a half day for a kidney stone.

So now that we all know that my dad is tough and Jadeveon Clowney's bone spurs really do bother him when he plays, let's look at some of the criticism he's faced.

"Well, for starters, he's clearly not conditioned." "He can't even seem to keep up with the ball." "He's got his hands on his hips, so clearly he's winded."

To one famous analyst, he was "disgraceful", and "the biggest joke in college football." He even pulled himself out of a game, and he guaranteed a win and said the rival team's quarterback was "scared of him."

Yikes. Well, what good did he do? Let's see:

- Jadeveon immediately made an impact as a freshman on a defensive line that consisted of four guys currently on NFL Rosters: Devin Taylor, Melvin Ingram, Byron Jerrideau, and Travian Robertson.

- Consider it coincidence or not: South Carolina was 3-0 when Clowney started against Clemson. Jadeveon tallied 6.5 sacks against the Tigers in those games.

So why isn't Jadeveon Clowney motivated, and why isn't he ripping heads off on every single play?

Most of the time, Jadeveon is much better than the offensive lineman assigned to block him. This causes some people to get a little salty, and be kind of cheap:

That doesn't look like very much fun. So, now we're going to take a step back. Forget that we're even talking about this Clowney dude for a second. Let's meet somebody else:

Some of you sports fans may know him already, but this guy's name is Eric Fisher. This time last year, Eric Fisher played for Central Michigan University. You might know of this team from watching a quarterback named Dan LeFevour in the CFL, he's the backup for the Hamilton Tiger-Cats. Anyways, Mr. Fisher here was selected first overall in the 2013 NFL Draft by the Kansas City Chiefs to protect quarterback Alex Smith from guys that are experts in demolishing quarterbacks.

Back to the video of Clowney getting the helmet to the leg. (Whether or not it was a malicious play is irrelevant at this point.)

If you were put on this planet built to terrorize quarterbacks, running backs, or whatever other player gets in your way, wouldn't you be interested in earning something like $5,500,000 per year to do something that you excel at? If you had to think more than three seconds about this, there are two possible reasons:

2) You don't possess a sound mind.

Furthermore, most of the plays involving Jadeveon Clowney happen when he has to go halfway across the field (or get through double or triple teams) to make them. It can be a lot of fun to watch:

It has truly been a pleasure to watch Jadeveon Clowney play for my favorite college team. I would like to thank him for all the memorable plays and wins that he's been responsible for - from making Aaron Murray fumble in 2011 to helping Tajh Boyd up in 2013. If South Carolina fans ever speak negatively of Clowney from a football perspective, they're being nothing less than foolish.

Even if the rest of the sports media doesn't seem to like you, I've got your back, Jadeveon.