The Legend of Connor Shaw 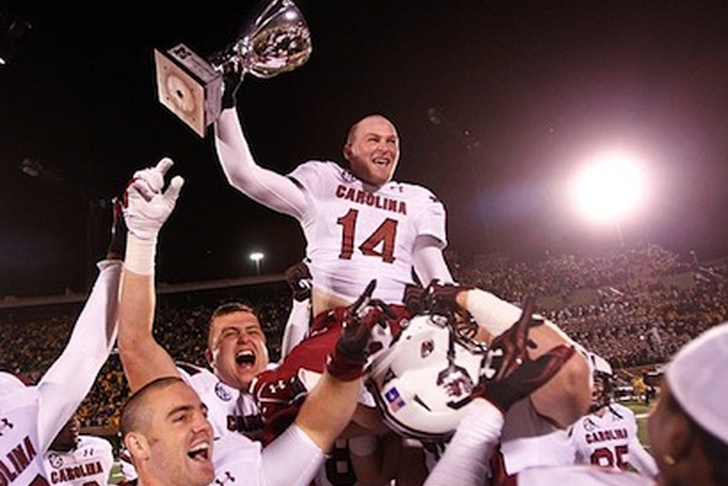 Underrated is an understatement, at least when it comes to South Carolina’s Senior Quarterback, Connor Shaw. Shaw maintains a 26-5 win/loss record when starting for the Gamecocks, with one start remaining in the Capital One Bowl against the Wisconsin Badgers. Shaw is undefeated at home as a starter, (17-0) silently going undefeated in front of the home crowd during his tenure as starting quarterback.

Words like, “productive” or “efficient” don’t provide an accurate measure of what Connor Shaw does. Shaw’s leadership capability as a quarterback is second to none in the country. This was evident in South Carolina’s double-overtime win against the Missouri Tigers - the only regular-season blemish on Missouri's record all season.

Connor Shaw engineered some of the greatest moments in Gamecock football history. Take your pick between two of the gutsiest performances a South Carolina quarterback has ever put on: the Missouri overtime thriller or the opening game of the 2012 season against Vanderbilt. In both games, Shaw played hurt, but he knew he was the only option if South Carolina was going to have a chance to win. Then there was the “hail mary” toss at the end of the first half of the 2011 Capital One Bowl that Alshon Jeffery grabbed in the end zone, scoring with no time remaining. You could even look at the 2011 or 2013 games against Clemson, where Shaw was yet again instrumental in victories.

Connor Shaw didn’t have the most amazing passing numbers, though they weren’t close to being bad. His arm was criticized after his first few starts, but it improved vastly along the next three seasons. Shaw was very efficient as a passer this season, boasting the 11th-best passer rating in the country at 160.8. Shaw has thrown just 16 interceptions during his entire career as a Gamecock, 25 less than the previous starter, Stephen Garcia. These numbers show just how far Shaw has come as a passer.

Connor Shaw could throw the ball well, but he'll probably be remembered most for making plays with his feet. Mobility was a vital asset for Shaw, and he frequently made something out of nothing. Shaw ran the read-option phenomenally well, and he also used his feet effectively to avoid sacks. Shaw was often criticized for escaping a pass rush before allowing the play to develop, but this was something that he improved on very well over time by learning to set his feet and throw the football under pressure. Shaw has scored 16 rushing touchdowns in his three seasons as a starting quarterback for the Gamecocks.

Will Connor Shaw play in the NFL? This is a question that's still up in the air. He isn’t the biggest or most talented quarterback out there, even though Steve Spurrier thinks Shaw deserves a shot. Shaw is an outstanding read-option QB, and a lot of NFL teams are turning to this new, popular style of offense. There are a few factors to consider that could have a negative impact on Connor Shaw’s NFL prospects.

The first problem is Shaw doesn’t have the strong cannon arm that most NFL Scouts are looking for in a quarterback. Shaw’s ability to throw longer passes has often been scrutinized, but this is something he's improved and will have to continue to improve. Another factor that works against Shaw is that his college career has often been interrupted by injuries. NFL Scouts are very reluctant to select a player that has dealt with a lot of injuries for the obvious reason that they don’t want to pay somebody that can’t contribute.

Shaw's work ethic and consistent improvement could outweigh the negative strikes against him, but only time will tell whether he has what it takes to extend his success to the NFL. Connor Shaw was the leader of South Carolina’s successful season this year, and his legend will continue to grow as he ends his career as the winningest quarterback ever to put on a Gamecock uniform.