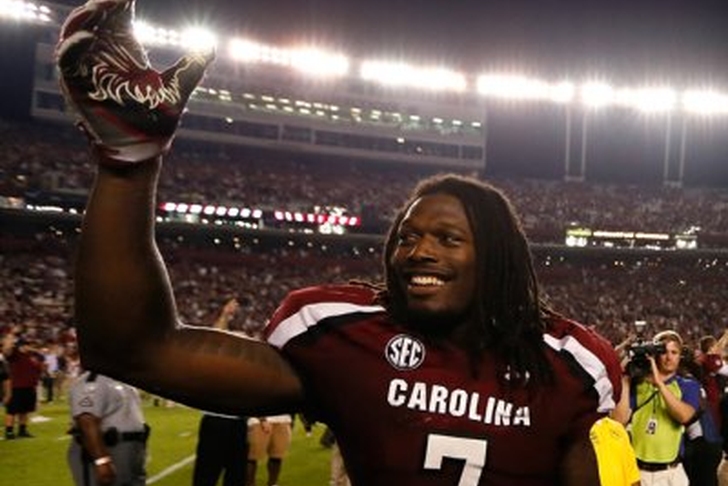 The South Carolina Gamecocks finished off their regular season with a fifth consecutive win against bitter in-state rival, Clemson on Saturday night in Columbia. Even though the scenario that would have sent South Carolina to Atlanta didn't play out, Gamecock fans have to be happy with the direction Steve Spurrier has the program headed in.

The University of South Carolina Athletic Department has a slogan: "It's great to be a Gamecock." - this has never been more true than it is now.

Steve Spurrier's Gamecocks have one remaining game this year against an opponent that's yet to be determined. If they win their bowl game, it will be the third 11-win season for South Carolina in program history.

Going into the 2011 Season, the program had only achieved one 10-win season.

Williams-Brice is quickly earning its reputation as one of the toughest places to play in the country. Spurrier's built a program before whose home stadium was a tough venue to play in - that place is known as "The Swamp".

Spurrier once had a 30-game win streak there. He now has an 18-game win streak in Columbia, something that, like many things Spurrier has accomplished, hasn't been done before.

Senior quarterback Connor Shaw will leave after this season as the greatest quarterback to play for South Carolina. He was 2-0 as a starter against Clemson, and 17-0 at Williams-Brice as a starting quarterback. Shaw only threw one interception this season, and was silently one of the most efficient passers in the country this year.

Shaw's play, however, won't be remembered by a statistic (even though his were never bad). His play will be remembered for its toughness and grit. His natural leadership was an outstanding attribute for South Carolina this season.

Then, there's the legacy of Jadaveon Clowney. 2010's number one recruit was easily the most schemed-against player in the country this season. Undeniably the best defensive player in the country, talent-wise, Clowney was a key component of a South Carolina defense that won at least ten games every season he played there. Clowney vowed to make sure South Carolina won against the Clemson Tigers last year, saying he "wouldn't know how it felt to lose against Clemson." Clowney was right, as he'll never experience a loss against the Tigers, and he found great success against them, tallying at least a sack in the game every year. Clowney will finish his career at South Carolina with six and a half sacks against Clemson.

So it really is "great to be a Gamecock."

But could it get better? Gamecock fans certainly have to be optimistic.

The Gamecocks have a plethora of bright spots looking into the future. South Carolina has never offered Spurrier the personnel he once used to run the "fun n' gun" style of offense that drove SEC defensive coordinators insane when they played him. Next year's edition of South Carolina Football will be the closest that Spurrier has ever been to replicating those high-flying Florida teams.

There's plenty of arms waiting to replace Connor Shaw after this season. Dylan Thompson is one of the them - Thompson stepped in and played phenomenally for Shaw in the 2012 season. He only started one game for Shaw this season, and that start set up the scenario in Missouri that Connor Shaw will always be remembered for as long as there's a football program at the University of South Carolina. Thompson played at a slightly lower level than he did in 2012 this season, but don't be fooled - he's the perfect prototype for a 1990's Spurrier-style offense.

Spurrier has done a magnificent job of piecing together an offensive line that in a few years could be one of the better units in the SEC. South Carolina has a lot of young depth in a position group that's rarely recognized, yet is extremely vital to success. Lorenzo Ward could get looks for head coaching vacancies because he's made a young defense extremely relevant.

Then there are guys like Mike Davis, Brandon Wilds, Jamari Smith, and Shon Carson, who have ran miraculously behind that offensive line this season. All are underclassmen, though you have to believe that if Mike Davis plays like he did this year, he'll probably be entering the NFL Draft in 2015. Not to mention, we haven't even seen the first carry from four-star, highly renowned recruit, David Williams from Philadelphia. How crazy would a five-man rotation be at tailback next season?

Then, how could you talk about all these running backs without even bringing up freshman Pharoh Cooper? Cooper is a receiver, but he's placed at the helm of South Carolina's "Wildcat" package. This adds yet another dynamic to an offense that's going to have almost endless possibilities.

South Carolina fans have to feel satisfied at this point, but there's seemingly only one goal that's evaded the Head Ball Coach in his tenure at South Carolina. That goal is an SEC Championship, and Columbia, South Carolina is starving to achieve that goal. Spurrier has made it legitimately tangible, something no coach has done since the Gamecocks entered the SEC in 1992. Doing things that nobody has done before hasn't been anything new for Spurrier, though. He's used to re-writing history books here, like he did this weekend beating Clemson for the fifth time in a row, something the Gamecocks have never done. His team will certainly be a contender for the conference next year.