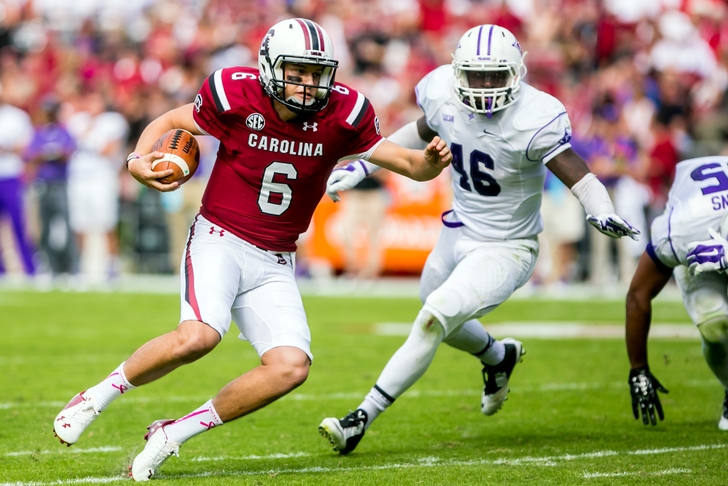 The South Carolina Gamecocks finished up the spring practice session with their annual Garnet & Black Spring Game at Williams-Brice Stadium on Saturday. 22,580 South Carolina fans watched Black's 14-13 comeback win over the Garnet squad, but the day was more about getting a look at the team's 2015 roster construction going forward. With that in mind, here's 3 things we learned from South Carolina's spring game.

The QB Competition Is Still Up In The Air

QBs Michael Scarnecchia, Connor Mitch, and Perry Orth split the available reps in Saturday's spring game, and while Scarnecchia led the day with 191 passing yards and the ultimately game-winning touchdown throw, nothing has been settled between the three as of yet.

“We’re still trying to see if one guy’s clearly better than the rest,” head coach Steve Spurrier said after the game. “We’re always trying to find out who the best player is, and if they’re pretty close in ability, then you play more than one, simple as that. We still got a lot of time to decide who’s our quarterback.”

South Carolina's defense struggled with inconsistency in the areas of pass rushing and wrap-up tackling in 2014, but that wasn't a problem for either squad's defense on Saturday. Both defensive units won the day by consistently getting pressure and executing perfect fundamentals on hits and tackles, giving fans plenty of room for optimism when it comes to stopping the SEC's litany of high-powered offense in 2015.

Deebo Samuel's Gonna Be A Star

While neither offense looked particularly in sync for the majority of the game, redshirt freshman wide receiver Deebo Samuel impressed both in his ball awareness and the maturity of his route-running style. He's going to be a heck of a complement across the field from the amazing Pharoh Cooper, giving whoever wins the QB competition another big-time weapon to play with.