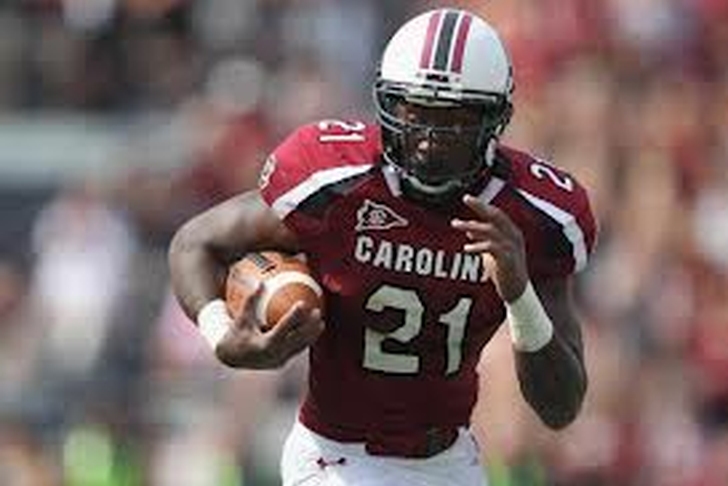 “Again?” I asked as I ducked slowly and deliberately in the aisle of the recreation center in the middle of good ol’ Joint Base Balad, located roughly forty miles outside of Baghdad. We were experiencing just another mortar volley on just another day. The alarm had gone off for what seemed to be the eleventh or twelfth time in the last thirty minutes, and this ducking to where it was hard to see the television nonsense was getting old fast.

What wasn’t getting old was watching this freshman Running Back, a kid who had been highly recruited out of the powerhouse known as Byrnes High School, put on a show that made any Gamecock fan’s eyes widen and chest swell with pride.

“Who is this guy?” I wondered.

He was miraculous. He fought to duck out of tackles and gracefully skipped across the earth like a stone thrown on the surface of water for extra yardage. He seemed to make something out of nothing and everything out of anything.

His name was Marcus Lattimore.

In that first month, Lattimore created his persona, a blend of hard running mixed with the scoring instincts. He wasn’t a flashy runner, but he sure was an effective one.

“That kid is pretty good.” My buddy, an Auburn fan, said.

Lattimore was that hometown sensation that decided to stay and play for his home state’s premier university. He could have gone and played with Cam Newton at Auburn that season, but instead, he stayed true to his home. Lattimore was a walking example of loyalty.

That wasn’t nearly the only lesson in values that Marcus Lattimore taught us. Not even close.

He was living proof that if you work hard, you can reach your potential, and ultimately, achieve your goals. He taught us how to keep our eyes on the prize despite any and all adversity we faced. He said something to Jon Gruden that will stick with me forever.

“Adversity introduces a man to himself.”

Lattimore has seen a lot of glory on the football field, but that doesn’t mean he’s never faced down adversity.

Back to that quote, though.

He just preformed, and he performed well.

This week, South Carolina hosts Florida in a game absolutely vital to securing a second trip to Atlanta for the SEC Championship. Unlike in 2010, South Carolina will need some outside help from the teams playing Missouri and Georgia, but beating the Florida Gators at Williams-Brice on Saturday is mandatory for the Gameocks if they’d like to make it back to Atlanta.

Steve Spurrier had a plan to help South Carolina win in Gainesville for the first time. It wasn’t the typical pass-heavy, trick-play attack that Spurrier had used to win games in the past.

It was Marcus Lattimore.

Lattimore carried the ball a school-record 40 times for 212 yards and 3 TDs in a 36-14 romp that gave South Carolina its first and only trip to the SEC Championship. In that game, Lattimore personified perseverance and determination with each and every carry. He made me celebrate in the early hours of the morning in a war-torn country and feel incredible pride for my home state - even though it was over 6,000 miles away.

That’s just what he does.

His statistics and the awards he's earned have made him champion at football. South Carolina fans will never be able to forget how he played the game with pure passion and a determination to win, but that ultimately isn’t Marcus Lattimore’s legacy at the University of South Carolina. It was his heart.

Lattimore is a champion of character.

A player with first-round talent that went in the fourth round thanks to his injury issues, Lattimore is sitting out the 2013 NFL Season with the San Francisco 49ers to heal and make a full recovery before returning to the game he loves. He’s a story of inspiration, and regardless of what team you pull for, you can’t help but hope for him to succeed.

Whether it happens in football or anything else he chooses to do with his life, Marcus Lattimore has found a winning formula - hard work, when combined with determination and character, creates success.