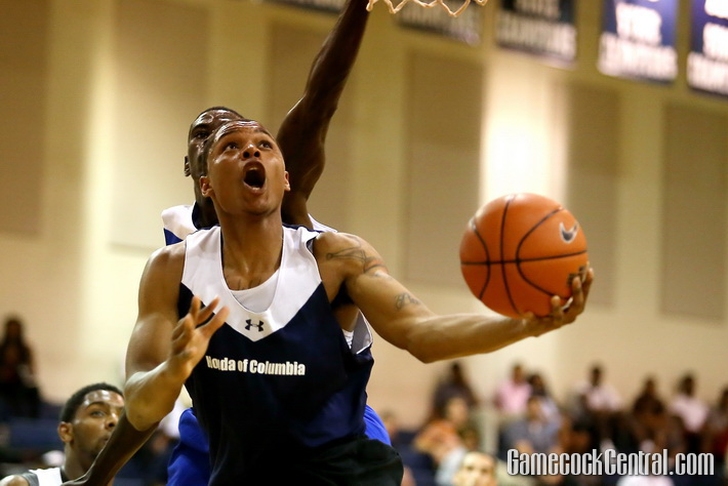 While South Carolina coach Frank Martin was certainly thrilled with his team's 38-point win in their season opener against Longwood, chances are he was already on cloud nine hours before tip off.

Junior guard Ty Johnson, a transfer from Villanova, had his waiver to play immediately granted by the NCAA.

Johnson did all he could with his chance to start and play Saturday, scoring a team high 18 points, including 15 in the second half. On a team with only six returning players, and three of those being sophomores, Johnson's skills and leadership will be critical to the Gamecocks' success in  Coach Martin's second year. In speaking with the media and in his play, you can see his leadership abilities already beginning to show.

Johnson was a top 75 recruit out of New Jersey when he committed to Villanova, averaging 3.3 points and two assists per game in 33 games as a freshman. Johnson elected to transfer in November of 2012 on the eve of Villanova's season, choosing South Carolina as his destination in December.

While Johnson didn't have mind-blowing numbers during his time at Villanova, the NCAA's decision will prove important for the Gamecocks, allowing Johnson to play more than a month before originally expected.

Johnson's leadership ability as the team's point guard will prove crucial, especially considering the team's youth. His long arms will prove vital on defense, and he also has a knack for driving the lane and getting to the basket, something a Gamecocks team that only averaged 66.1 points per game last year will greatly appreciate.

And Johnson's talent was immediately on show in Saturday's opening win against Longwood - he scored 18 points, and added two assists and two rebounds. The Gamecocks shared the ball well with him at point guard, as four players scored in double figures.

Time will tell how well this young South Carolina squad will fare this season, with 12 out of 16 players on the roster being underclassmen. But the addition of Ty Johnson will prove to be huge, allowing him to gain more confidence in Frank Martin's system ahead of the SEC slate.