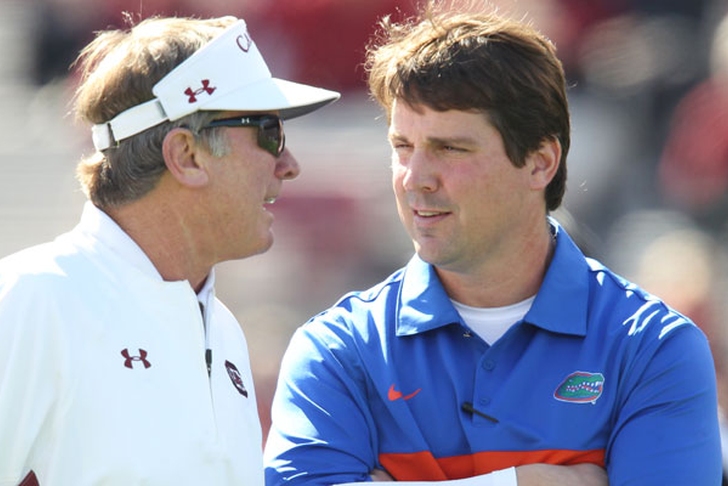 The University of Florida began the 2013 season ranked #10 in the country, with hopes of building off their 11-2 2012 season under second year coach Will Muschamp, and fighting for a spot in the SEC Championship.

Nine games later, the Gators are simply fighting to make it to a bowl game.

Muschamp's Gators, coming off of their first loss to Vanderbilt at Ben-Hill Griffin Stadium

since World War II, will head into Columbia, SC as heavy underdogs Saturday night. The Gators, ravaged with injuries, are going to have to upset a top 10 team at least once in their final three games in order to avoid missing a bowl for the first time since 1990.

The Gamecocks come into Saturday night's game with the opportunity to play in Atlanta still very much alive. A win Saturday, paired with a Georgia loss at Auburn and a Missouri loss in one of its final two games, would put the Gamecocks in Atlanta for the second time in four years.

Much of Florida's woes this season can be attributed to the number of injuries they've suffered throughout the year. 10 Gators starters have gone down with injuries, including the most recent injury to top-tackler Antonio Morrison, who is out for the year after suffering a torn meniscus in last week's loss to Vanderbilt.

Florida comes into Columbia having lost its last four games, leading both their President and athletic director to reassure fans that they fully support embattled coach Will Muschamp.

South Carolina comes into Saturday with a 15-game home winning streak on the line, and the Gamecocks got some much-needed rest after a bye week last week. While the Gators can't seem to get healthy, the Gamecocks spent the off week resting and healing up.

Florida and South Carolina are on opposite ends of the spectrum, both in talent and health. Florida quarterback Tyler Murphy has yet to be able to practice this week with a bruised shoulder, possibly forcing the Gators to start redshirt freshman Skyler Mornhinweg against a South Carolina defensive line with 18 sacks on the year.

Defensively, South Carolina will have to focus on stopping the Gators' running game, and forcing Mornhinweg to throw the ball. The Gamecocks' defense may have had their breakout game two weeks ago against Mississippi State, forcing five turnovers in a 34-16 victory.

Offensively, the Gamecocks should be able to move the ball on the ground with Mike David and through the air with Connor Shaw. Shaw will no longer be playing with a knee brace, which should allow him to be fully mobile, adding another dynamic that the Florida defense must prepare for.

In the end, the Gamecocks should control this game throughout. Florida will show glimpses on offense where they'll be able to move the ball, but it won't be enough to keep up with a South Carolina offense averaging 456 yards and 32.1 points per game.