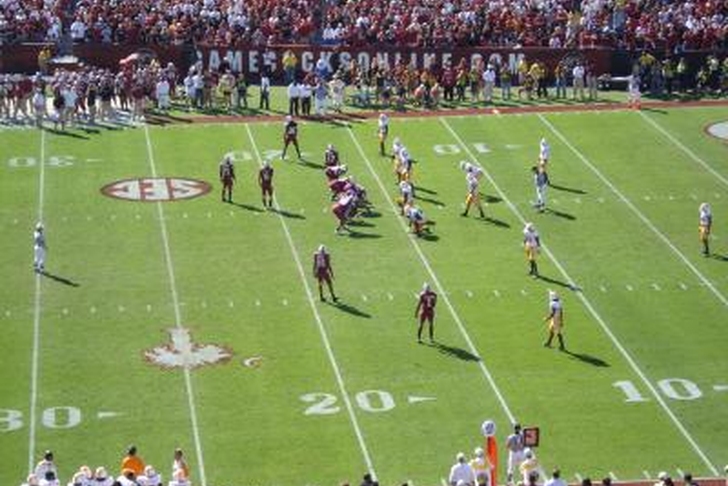 The South Carolina Gamecocks played an offense-versus-defense style scrimmage Saturday in Williams-Brice Stadium. Quarterbacks Dylan Thompson and Perry Orth led the "Black" squad against the "Garnet" team that was quarterbacked by Connor Mitch and Brendan Nosovitch. The Black team defeated the Garnet 28-10. Here are five things that I observed from the Gamecocks during their Spring Game:

#1: The Gamecocks have a running back for just about every situation.

The 2014 Gamecock team will have Junior Mike Davis as its featured running back. Davis will compete to be the best running back in the conference. He wasn't featured much in this game, but also wasn't expected to be. Brandon Wilds made some good catches out of the backfield along with some nice runs, including a touchdown on the Black team's first drive.

David Williams rushed for two touchdowns in the game. His slashing style looked similar to the style Marcus Lattimore used to grind out yards while at South Carolina. Shonn Carson was presented as the most improved running back of the spring. Redshirt Sophomore Devin Potter also added some tough runs and had several receptions.

This is tough to imagine in a Spring Game, but the Gamecocks' defensive backs played very physical against the receivers. Sophomore Skai Moore stripped redshirt sophomore Jody Fuller after Fuller made a terrific catch over the middle of the field. The Gamecock cornerbacks had a tough time defending the Carolina receivers, but the "no blitzing" rule really played a disadvantage to the defense.

#3: The quarterback situation is stable.

Dylan Thompson looked like the leader of the offense and put together two really good drives to open the game. He only made one questionable throw on his first two drives, where he overthrew his receiver. Thompson threw his only passing touchdown to women's basketball coach Dawn Staley, who was flagged for her celebration.

Connor Mitch and Brendan Nosovitch are clearly battling to be Thompson's backup. Mitch looked more solid throwing ball for the Garnet team. He made some good reads and checked down when he needed to do so. Nosovitch seemed to scramble more than he needed to and only completed three of his nine passes. Perry Orth threw a nice, lofty touchdown pass to Matrick Belton but struggled the rest of the scrimmage.

#4: The Gamecock offense could run at a brutal pace.

Coach Spurrier surely wasn't going to show his full hand today, but early in the game, South Carolina was running at a quick tempo. I couldn't help but wonder if this was just a preview of how fast the Gamecocks' offense could actually operate.

#5: The Gamecocks have an abundance of receivers.

The Gamecocks are very deep at wide receiver and tight end going into 2014. South Carolina will be rotating a group of big receivers that all have good hands. Steve Spurrier has a lot of explosive options to choose from this season, and this offense could be one of the biggest surprises of 2014.