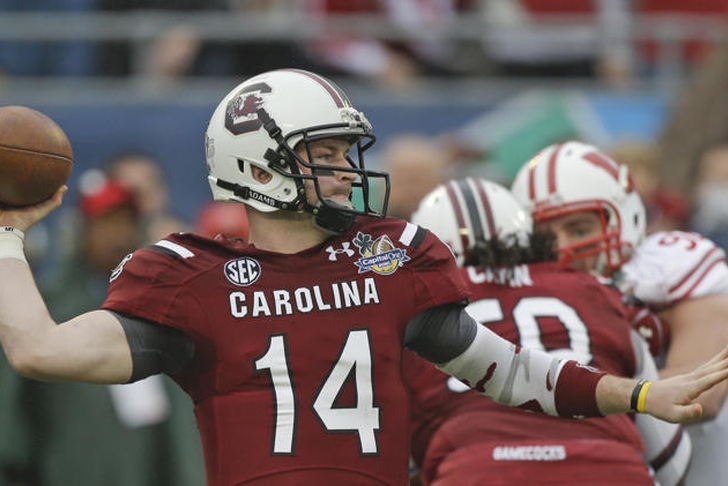 While all of these players were all finalists for the Heisman Trophy and had extremely impressive seasons, none of them meant more to their team than Connor Shaw did to the South Carolina Gamecocks.

Shaw didn't throw for nearly as many touchdowns as Winston, and he threw for 500 fewer passing yards than McCarron, but what he brought to a Gamecocks team that won 33 games in his three years as starting quarterback can't be measured in statistics.

It all began in the preseason of 2010, when Gamecocks coach Steve Spurrier named Shaw the opening-day starter over incumbent (but troubled) quarterback Stephen Garcia. Spurrier claimed that Shaw simply outplayed Garcia in training camp and truly earned the starting nod. Many fans questioned the decision, and the doubters looked vindicated when Shaw only lasted one quarter against East Carolina and Garcia came in to lead the Gamecocks back from a 17-0 deficit.

Four games later, Garcia was no longer with the program thanks to his struggles with substance abuse. Shaw was the guy, whether fans liked it or not, and he proved himself in his return to the starting lineup. South Carolina cruised to a 54-3 win over Kentucky, and Shaw would win 26 of his next 31 games as a starter.

It was Shaw's 2013 campaign, though, that made him the best quarterback in Gamecock history. Ironically, it was the one game that he didn't start that encompassed everything he's meant to the Gamecocks over the course of his career.

On October 26th, the Gamecocks faced a 17-0 deficit on the road in Columbia, Missouri. Backup quarterback Dylan Thompson was starting in place of Shaw, who had sprained his knee in the previous week's loss to Tennessee. Although Thompson had proven himself numerous times over his career as a quality QB, he just wasn't able to get anything going that night.

Shaw, who was also battling flu-like symptoms before the game, heard Steve Spurrier call his number. At the beginning of the 4th quarter, Shaw came in to try to spark an offense that had looked totally inept up to that point. Shaw immediately led the Gamecocks back from the dead. He finished 20-29 for 201 yards and three touchdowns, including a two-yard TD pass to Nick Jones that tied the game with 42 seconds left in regulation - and a miraculous 15-yard TD pass on fourth down to extend the game to a second overtime, where the Gamecocks won 27-24.

But for all the stats that Shaw put up in 2013 and over the course of his career, the only one he was ever worried about was the number in the win column. Shaw was the most selfless player on a Gamecocks squad that has had its best three-year run in the program history - a run that included three straight 11-win seasons, five straight wins over in-state rival Clemson, and three straight bowl victories. Before South Carolina's 2011 Capital One Bowl victory, the Gamecocks had only won four bowl games in their over 100 years as a division 1 team.

It's no coincidence that Shaw was at the helm during South Carolina's best run ever. If the Heisman Trophy was more about the most valuable player rather than the guy with the most impressive stats, Shaw would have garnered much more attention.

There's no telling how many games the Gamecocks would have won if Shaw wasn't giving everything he had on the field over the past four years. But thankfully for South Carolina fans, number 14 was their guy, winning games no matter the pain or the cost - and for that, Gamecock Nation will always be grateful.