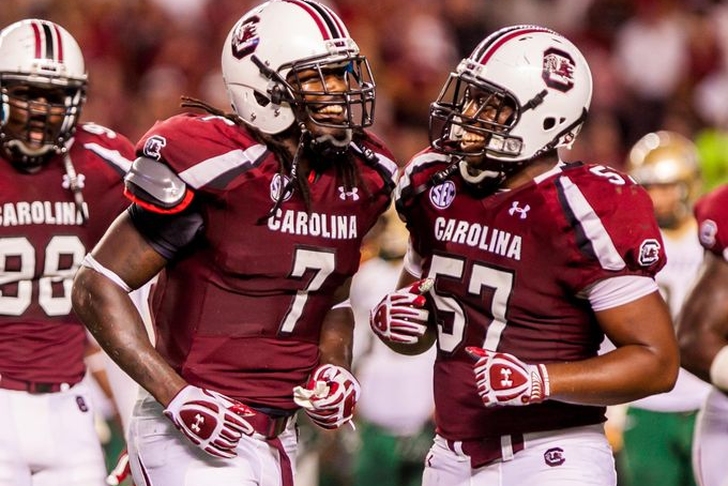 South Carolina offensive line coach Shawn Elliot knows all too well what a huge upset can do for a program. He was the offensive line coach at Appalachian State in 2007 when the Mountaineers travelled to the Big House and upset the 5th-ranked Michigan Wolverines, so it's well known that he's doing all he can to keep his line focused heading into the Gamecocks' first ever gridiron meeting with the Coastal Carolina Chanticleers.

The Chanticleers are by no means a pushover this weekend, as they sit at 10-1 and #7 in the FCS polls. Led by Coach Joe Moglia, Coastal's only loss of the year came in a a five point loss to Charleston Southern.

While this weekend will be no cake walk for the Gamecocks, it shouldn't be a nailbiter either. Unlike previous FCS opponents such as Wofford, Coastal does not run the triple option offense, instead going with a more pro-style running and passing attack. Running back Lorenzo Taliaferro only has nine negative rushing yards on the year and has accounted for 1466 yards on the ground. Quarterback Alex Ross has thrown for 17 touchdowns and only six interceptions, while throwing for 228 yards per game.

South Carolina is coming off a 19-14 win over Florida last Saturday, and for the first time all season, multiple players are dealing with injuries. Defensive end Jadeveon Clowney (foot), defensive lineman Kelcy Quarles (head), running back Mike Davis (ankle), and defensive back Brison Williams (forearm) all missed practice time this week. Quarles and Williams are definitely out for Saturday's contest, with Williams done for 2-3 weeks. Davis may dress, but sophomore back Shon Carson will start and only give way to Davis in a dire situation. Quarterback Connor Shaw, while fully expected to start and play, is still not at 100% and really hasn't been at full speed since his knee injury in October's loss at Tennessee. Head coach Steve Spurrier has also said backup QB Dylan Thompson will see playing time this week.

South Carolina will try to jump on Coastal early and put any thoughts of a major upset to rest. The Gamecocks' offense has fallen off slightly since scoring 52 points in a win at Arkansas, struggling to get the ball into the end zone against Florida as Connor Shaw seemed off on many of his throws. They should be able to move the ball against an undersized Coastal defense, and expect Carson to play very well in his first ever career start.

Defensively, the Gamecocks seem to be coming together at the right time, allowing an average of just over 18 points in their last five games. While they're still prone to giving up big plays, USC's secondary has played better over that span. Even with an experience player such as Quarles out, the defensive line should be able to get a push with backup Philip Dukes and Clowney able to handle to Chanticleers' running attack.

Even with a game against in-state rival Clemson and a possible SEC Championship game on the horizon, the Gamecocks will not look past Coastal and will play well Saturday. Expect them to put up more points than they did last week and use their superior talent and size on defense to stop the Coastal offense.