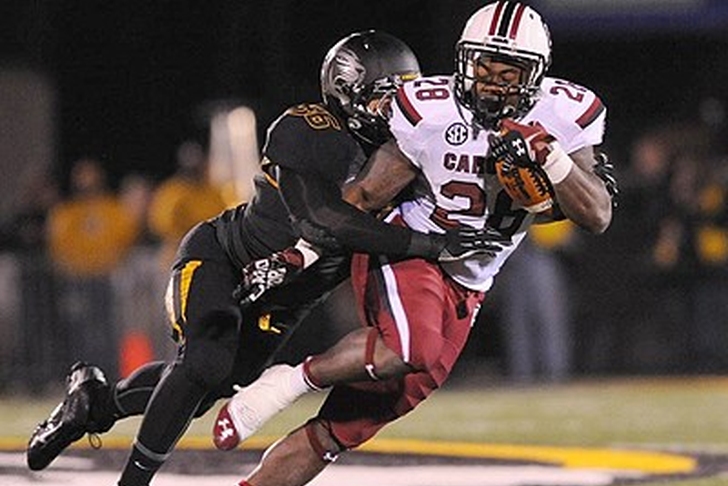 The level of competition in the SEC East this season has been the highest in the country. Week 12 didn't sway from continuing the craziness that has endured over the course of this season. There's only one way to guarantee a trip to Atlanta from the East:

Those two teams have very different routes to Atlanta.

Missouri must drive through Oxford, Mississippi first to face a young Rebel team that has given opponents fits all season. The Tigers will be favored. Win or lose, they will still have to host Johnny Football in what will be his last SEC Conference game. They have to win both in order to face either Auburn or Alabama in the title game. The "Iron Bowl" will be the de facto SEC West "Championship Game."

Missouri will have to take care of business.

The Gamecocks defeated the Florida Gators, 19-14, Saturday to set a school record with 16 consecutive home wins. Florida gave the Gamecocks everything they had, in what was a valiant effort for a team that was ranked #10 in the preseason. Connor Shaw wasn't at his best, but he completed passes when it was necessary. The one turnover that Freshman Skyler Mournhinweg committed was the only one in the game, yet it sealed the deal for a Gamecock win. This puts South Carolina waiting at the bus station for tickets to Atlanta that must be purchased by Missouri.

South Carolina has been a fourth down away from being eliminated from the title game, twice. One on such an amazingly clutch throw by Connor Shaw that somehow found Bruce Ellington in overtime at Missouri. One on a play that made the Georgia Bulldogs the victim of the greatest play in SEC history. These two plays put Steve Spurrier's team from not even being in the conversation to being at the forefront of the conversation.

So traveling into the last two weeks of SEC play, what will be the deciding factor for the East? Will it be Connor Shaw's leadership against Missouri? Will it be a high speed Missouri offense that was able to race past division opponents? Will it be the miracle that happened in Jordan-Hare Stadium last night? Nobody knows for certain. One thing, however, is for certain: The SEC East race was and is as compelling this year, as it has ever been. Fans can't help but enjoy the elite level of competition for this side of the conference that has simply been lacking in past years. The beautiful thing is that there still epic plays to come that will decide this race that will be one for the ages.