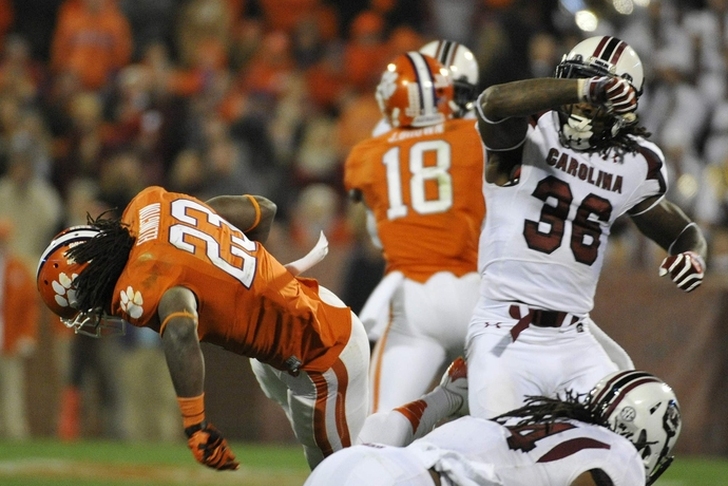 The Steve Spurrier era at South Carolina came to an end this week as the Head Ball Coach announced his resignation/retirement from college football, but it will be remembered as the most successful era in the program's history. Here are the six best moments from the 11 years that Spurrier led the Gamecocks:

This was South Carolina's first win over a top-5 team in nearly 30 years, which was monumental for the program itself - but it also started the school's beloved "Sandstrom" tradition prior to games and after touchdowns.

South Carolina's first and only SEC East title is special, but clinching it over Florida in SC's first ever victory in the Swamp added to the feeling.

Spurrier has always been good for a zinger or two at his press conferences, and he didn't hold back against Clemson and Georgia during his stint in Columbia.

"We aren't LSU and we aren't Alabama. But we sure ain't Clemson."

"I said, ‘Well, what do you want me to do? I didn't say it.' Smart people don't believe everything they read, and they don't believe hearsay. ... I guess Dabo believed it."

"I don't know. I sort of always liked playing them that second game because you could always count on them having two or three key players suspended."

Prior to the game, the South Carolina program was only one game above .500 in its entire history. Even as heavy underdogs, the Gamecocks were able to snap defending national champion Alabama's 20-game winning streak, setting the stage for the three straight 11-win seasons to come. It's without a doubt the most important game in school history, and the Gamecocks' only win over a No. 1 team.

Spurrier admitted that the streak at Williams-Brice Stadium from 2011-2013 was his favorite memory of his tenure, and it's something South Carolina fans will always hold dear. Columbia became the hardest place to play in the entire country, and opposing players - most notably Tajh Boyd and Aaron Murray - came in scared. It put Williams-Brice on the map and raised the profile of the entire program.

Nothing means more to South Carolina fans than having the upper hand on Clemson. Being the better team for half a decade straight? Priceless.