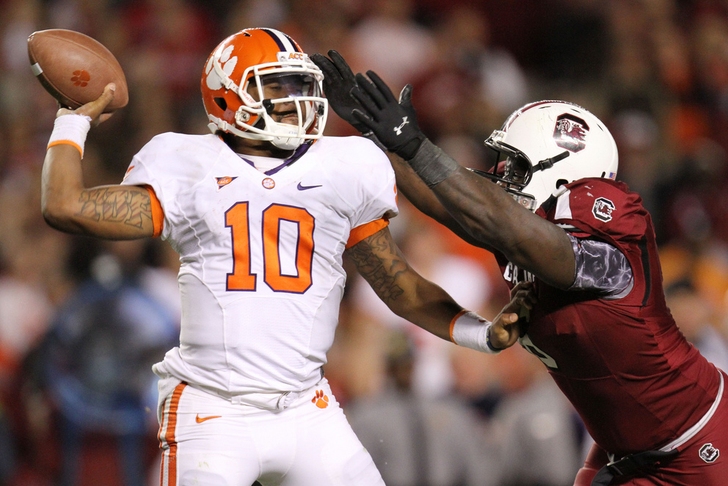 The 6th-ranked Clemson Tigers will look to end their 4-game skid against their in-state rivals as they travel to Columbia Saturday to face the 10th-ranked Gamecocks.

What Clemson must to do win

It's no secret that Clemson doesn't struggle to score points. The Tigers, led by senior quarterback Tajh Boyd, rank 8th in the nation in passing yards (338.8) and 10th in scoring (42.3). The Tigers will be facing one of the more stout defenses they've seen all year in South Carolina, but they'll have to create a consistent running game in order for Boyd to have the opportunities to go over the top to receivers Sammy Watkins and Martavis Bryant.

get the win. McDowell, who has rushed for 845 yards on the season, will be looking to take some of the load off of Boyd, who was sacked multiple times in last year's meeting, including 4.5 by Jadeveon Clowney. Boyd may also have the opportunity for designed quarterback runs Saturday night, as the South Carolina defense has had some difficulty stopping wildcat formations this year.

Defensively, the Tigers will face their most difficult test since they were gashed for 51 points against Florida State. South Carolina presents a very balanced offense, and is certainly the most proficient passing team the Tigers have faced since Jameis Winston and the Seminoles threw for 441 yards against them. While the Gamecocks offense is not nearly as explosive as Florida State's, they could present some issues for the Tigers' defense, especially with Connor Shaw's mobility and arm strength. The Tigers must contain Shaw and slow down the SEC's leading rusher, Mike Davis, who comes into the game with over 1,100 yards on the ground.

What South Carolina must do to win

South Carolina is coming off what was easily their most impressive offensive performance of the year against Coastal Carolina last weekend, where they scored 70 points and piled up 639 yards of offense, including 352 yards on the ground. For South Carolina, the best thing about last weekend was the opportunity to rest many of their starters. Quarterback Connor Shaw didn't play after the first quarter, and Mike Davis and defensive end Jadeveon Clowney did not play at all.

The Gamecocks will to try to pound Clemson on the ground in order to open up the passing game. Clemson's defensive end Vic Beasley will be one the of toughest tests the Gamecocks have seen all year. Beasley comes into the contest with nine sacks on the year, and will look to put pressure on Shaw and try to contain Davis. South Carolina will try to test the Tigers' secondary, which hasn't faced a team that poses a true threat through the air since Georgia and Florida State. South Carolina's best defense will be their offense. They'll try to grind the ball and stay on the field as long as they can, keeping Clemson's offense off the field.

When the Clemson offense is on the field, the Gamecocks will do their best to contain the speed and explosiveness of Clemson. This will be the best offense the Gamecocks have faced since traveling to Columbia, Missouri, where they held Mizzou to 17 points and 400 yards of offense. The key will be how Clemson game plans against Clowney. While Clowney hasn't put up the incredible numbers many thought he would this year, he is still a force to be reckoned with.

In last year's game, Clemson tried to block Clowney one-on-one with their left tackle, leading to Clowney's 4.5 sacks. Look for Clemson to use more double-teams and possibly send a fullback to help block Clowney, which could potentially lead to more opportunities for players like Kelcy Quarles. Pressuring Boyd and forcing him outside of the pocket will be key for South Carolina's defense.

It's difficult for anyone to beat a team five years in a row. Clemson comes into South Carolina with a very strong offense and an improved defense over year's past, which could pose some problems for the Gamecocks. But with the game being in Columbia, a place where the Gamecocks have won a record 17-straight games, South Carolina will be able to score points and hold Clemson's offense. Shaw will be able to run and throw, and the Gamecocks will win their 5th straight over the Tigers for the first time in the history of the rivalry.