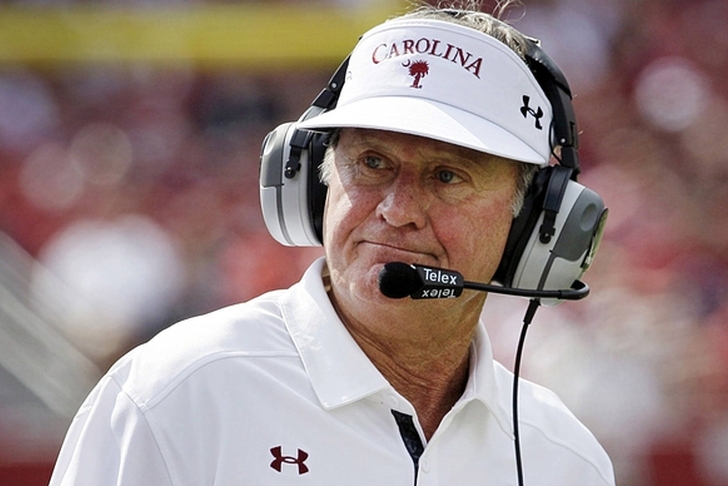 Steve Spurrier has had an incredible career. The Ol' Ball Coach has had a storied career, but the writing is on the wall for Spurrier's time with the South Carolina Gamecocks. It's not a knock against Spurrier, but all good things must come to an end. Here are four reasons why this is Spurrier's last season as a head coach.

South Carolina Is On The Decline

The Gamecocks lost to Kentucky in back-to-back seasons for the first time in 16 years and were blown out by Georgia. Kentucky is a team on the rise, but South Carolina shouldn't lose to Kentucky. The loss to the Wildcats and the massacre at the hands of the Bulldogs are a clear indication South Carolina is declining. Spurrier hasn't struggled this much as a head coach since he was coaching the Washington Redskins. An aging coach with a program on the decline isn't a good combination.

Spurrier is 70, an old age for a head coach. Yes, Joe Paterno and Bobby Bowden coached into their 80s, but they are the exception to the rule. Bear Bryant didn't even make it into his 70s as a head coach. It's not a dig against Spurrier; he's a beloved coach for a good reason. But, at this point, it is time for Spurrier to ride off into the sunset.

Recruiting Will Be Hard

Having an again coach who may or may not be in town for several more years hurts recruiting. If a recruit has a choice between signing with Spurrier, knowing he might retire in a season or two, or joining a program with head coaching stability, the team with coaching stability has a big advantage. As long as Spurrier is in charge, South Carolina will have a disadvantage in recruiting. In the SEC, poor recruiting is something teams can't afford if they want to win.

Right now, South Carolina doesn't have the talent to compete in the SEC East. The Gamecocks need to rebuild. Having an aging coach is not going to make that process any easier. The best thing for South Carolina's future is for Spurrier to retire. Spurrier can still be involved in the program and there is a clause in his contract stipulating that. Spurrier should have no interest taking on a rebuilding project at his age, and that's why he'll retire after this season.