3 Things We Learned From South Carolina's Opening Win Over UNC 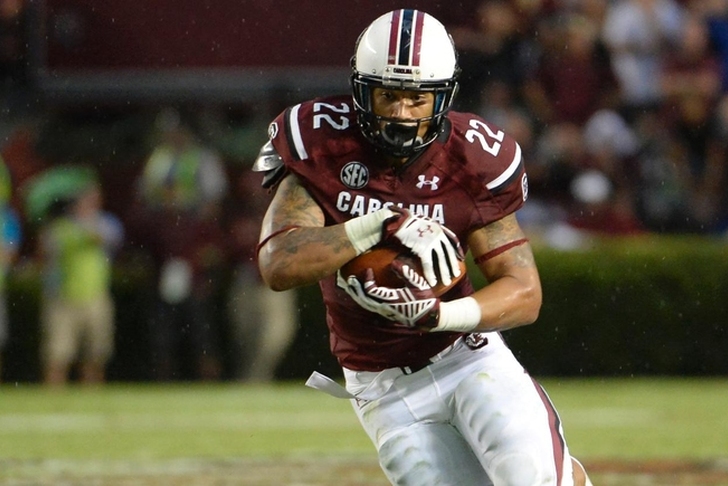 It was by no means pretty, but Steve Spurrier's South Carolina Gamecocks got the job done in a 17-13 season-opening victory over the North Carolina Tar Heels in Charlotte. Here's 3 things we learned from South Carolina's ugly escape job on Thursday.

1. The Gamecocks' Pass Defense Is Clutch

If you took a quick glance at UNC quarterback Marquise Williams' line for Thursday night, you might be marginally impressed by his 19-for-31 passing for 232 yards and a score. Then you'd see his three interceptions and get the picture about how South Carolina's defense was able to bend and not break in Charlotte. UNC moved the ball fine between the 20s all night long, but Williams shot all of their toes off by leading his receivers and allowing the Gamecocks' pass defense to catch up and end drives with a dramatic flourish.

As on-target as the pass defense was when it counted, the rush defense is a major cause of concern for the D as a whole right now. Elijah Hood is a good running back overall, but he's not 13 carries, 138 yards good -- at least not on a consistent basis. South Carolina's Kryptonite right now is powerful rushers with great leg drive and the ability to stiff arm themselves to the second and third levels. If the Gamecocks can't learn to wrap lower with more regularity, they're going to get run out of SEC play this year.

Connor Mitch won the Gamecocks' starting job outright in camp, but he was an inconsistent mess as a passer on Thursday -- missing wide-open receivers and generally appearing out of rhythm with the Tar Heels pass rush bearing down on him. Sensing that Mitch was over his head in the pocket, Spurrier went to the ground attack, spreading out the carries between Mitch (10), Brandon Wilds (14) and David Williams (10). Shon Carson's 48-yard TD burst was the difference in this one, but it was set up by the fact that Steve Spurrier and the Gamecocks overloaded the run (47 carries) compared to the pass (27 attempts). This trend will continue, especially with Mitch going down in the 4th quarter with an apparent hip injury.