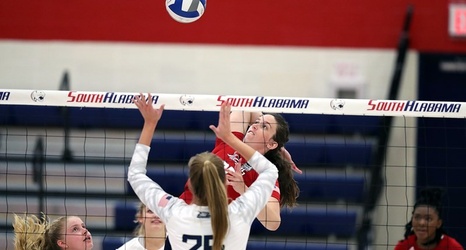 MOBILE, Ala. – The University of South Alabama volleyball team defeated Georgia Southern in four sets (25-9, 25-18, 24-26, 25-15) Friday at Jag Gym to secure a sweep of the three-match Sun Belt Conference series.

USA (7-8, 7-4 SBC) extended its win streak to three matches with the win, which marked its sixth straight over Georgia Southern. South Alabama's Maddie Soboleski and Hannah Harris each recorded a double-double in the match, which was the final home contest of the regular season.

GAME FACTS
- South Alabama opened set one with a 6-0 scoring run that was highlighted by kills from Hannah Maddux, Hannah Harris and Rebecca Walk.