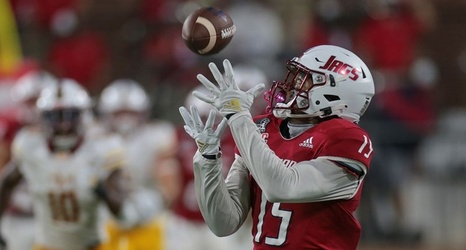 NEW ORLEANS – The University of South Alabama's Kawaan Baker was honored Monday when the Sun Belt Conference office announced that the senior wide receiver has been selected the league's co-Offensive Player of the Week.

It's the first time in his career that Baker — who was also named the SBC Offensive Player of the Week by College Sports Madness — has been honored by the conference, as he joins fellow wideout Jalen Tolbert, who was recognized following the Jaguars' season-opening victory at Southern Mississippi, in picking up the award this fall.

In South's 38-14 win over ULM on Saturday, Baker caught six passes for a career-best 154 yards and three touchdowns to help lead the Jaguars past a Warhawk defense that entered play allowing just 167 yards per game passing.