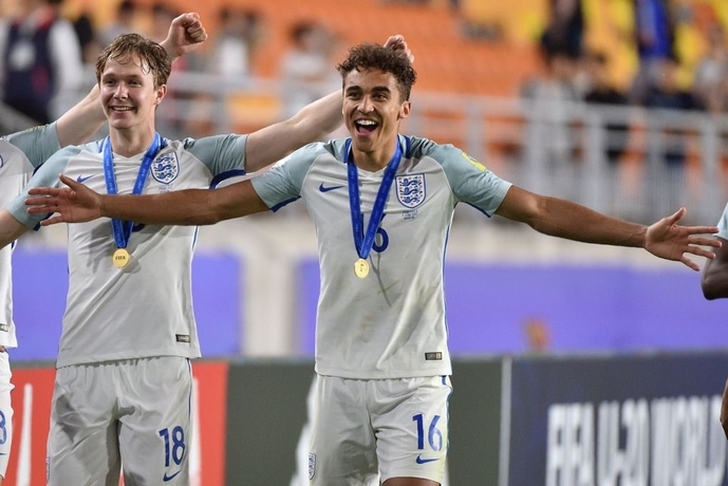 England ran out 1-0 winners over Venezuela on Sunday to secure the Under-20 World Cup title. Everton’s Dominic Calvert-Lewin scored the only goal of a pulsating and often open-ended clash, eventually burying the ball past a sprawling Wuilker Faríñez who had saved his first effort on goal whilst Newcastle United’s Freddie Woodman saved a late penalty from Málaga’s Adalberto Penaranda to guarantee an historic win.

The tournament has showcased the abilities of some of England’s burgeoning Premier League talents, including the likes of Tottenham’s Josh Onomah and Liverpool duo Ovie Ejaria and Sheyi Ojo, who featured alongside a quartet of Evertonian prospects.

Dominic Solanke, who bigfreebet.com among others reports, is set to join Liverpool from Chelsea on the opening of the transfer window, added to the English tournament success as he secured the Golden Ball award for player of the tournament – joining a list that includes such elite names as Paul Pogba and Lionel Messi.

Whilst the players and coaching stuff will deservedly see their fair share plaudits for the stunning victory, the critical role that the St George’s Park National Football Centre has played in developing England’s prospective youth talents and delivering this success since its inception should not be underestimated.

The national football centre project was approved in 2008 and is founded upon the principles of France’s iconic Clairefontaine training centre that has developed some of French football’s greatest talents, including Thierry Henry, Nicolas Anelka and Monaco’s Kylian Mbappe.

The £105m facility, opened in 2012 and set in 330-acres of Staffordshire countryside, boasts elite training amenities that includes 13 outdoor pitches, including a replica of the Wembley surface, and a suite of state-of-the-art rehabilitation and sports science areas.

The facilities have been developed with a view to battling the perceived underperformance of the England national team relative to their European counterparts, with chairman David Sheepshanks stating to the BBC: “the objective is to create a new generation of more technically gifted players and, every bit as important, a new generation of decision-making players.”

Victory over Venezuela at the Suwon World Cup Stadium suggests that the ambition to see an underachieving national side finally make an impact on the world stage is slowly beginning to come to fruition.

Whilst the complex has not been without its detractors – former Liverpool and England captain Steven Gerrard previously described it as “boring” and having failed to “create that atmosphere where England players are desperate to get away and do well” – England’s Under-20 World Cup victory will give the FA hope that the investment can play a significant role in finally delivering on-the-field success at the senior level.