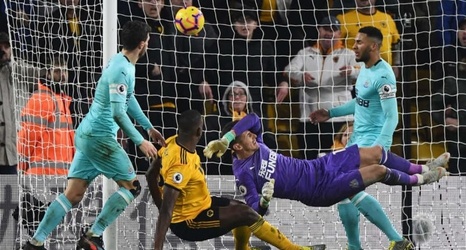 Willy Boly scored a controversial 95th minute equaliser to earn Wolves a last-gasp 1-1 draw against Newcastle United in the Premier League at Molineux on Monday evening.

In added time of stoppage time, a long ball was heaved into the box, which Newcastle goalkeeper Martin Dubravka attempted to catch under the crossbar, but the ball spilled through his hands under pressure from Boly, allowing the Wolves defender to head home and send Molineux into delirium.

Newcastle looked to have all three points in the bag when Isaac Hayden's strike had put them ahead midway through the second half, but Bolly, who looked to have fouled Dubraka before scoring, restored parity at the death.