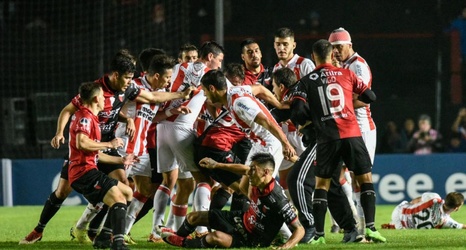 Colón defeated River Plate 3–1 on aggregate to advance in the Copa Sudamericana on Tuesday night, but not before some late-game drama.

Two players were shown red cards in stoppage time as an on-field fight broke out on the pitch. One Colón player was pushed by a River Plate member before being bulldozed by another as the fracas ensued.

Things got ugly in the final minutes of @ColonOficial vs. @cariveruruguay. Red cards shown to both sides once the police left the field ud83dude21ud83dude33 #Sudamericana pic.