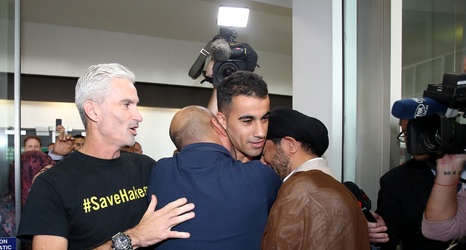 A soccer player who was jailed in Thailand and faced being sent back to his native Bahrain, where he said he would be imprisoned and tortured, was released Monday after Thai prosecutors dropped the extradition case against him.

On Tuesday afternoon, the player, Hakeem al-Araibi, arrived back in Australia, where he has refugee status. He was greeted at the airport in Melbourne by a swarm of well-wishers, who started singing, “You’ll Never Walk Alone,” a popular soccer anthem.

“Amazing to see all the people here,” he said. “I’m going to die in Australia.