Memphis Depay at the double in Dutch win 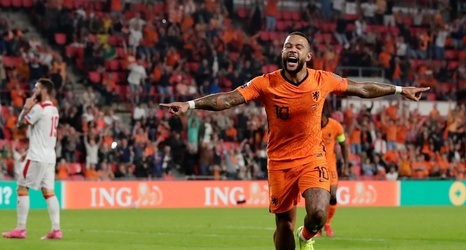 Memphis Depay’s rich vein of goalscoring form has continued with two goals for the Netherlands against Montenegro in World Cup qualifying on Saturday.

The Barcelona forward opened the scoring from the penalty spot on 38 minutes. His strike means he’s not converted six of his seven penalties for his country (thanks Opta). The only players to have scored more penalties for the Netherlands are Ronald Koeman (8), Robin van Persie (7) and Johan Neeskens (7).

You get the feeling that Memphis may well end up taking the penalties for Barca this season, particularly with Lionel Messi, and Antoine Griezmann having both departed

The new Barcelona signing then then added a fine second goal just after the hour mark.