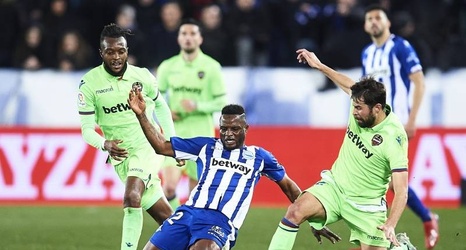 Alaves climbed back into La Liga's top six on Monday after they beat Levante 2-0 to snap a four-match winless streak and move back ahead of Real Betis in the standings.

Victor Laguardia's first-half header was the difference between the two sides for the vast majority of their clash at Estadio de Mendizorroza, until winger Jony turned a second in to double their advantage in injury time.

Levante have now lost their last five away matches in a row and are 13th in La Liga, but only four points separate them from the bottom three.

Monday's hosts had failed to score in their previous three games and have rejuvenated their European qualification hopes thanks to their Week 23 win.