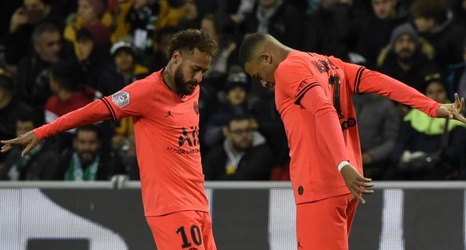 Kylian Mbappe bagged a brace as Paris Saint-Germain beat 10-man Saint-Etienne 4-0 on Sunday in Ligue 1 at the Stade Geoffroy-Guichard.

The league champions went ahead on nine minutes through Leandro Paredes' first goal for the club, while Mbappe had an effort ruled out for offside three minutes later.

Saint-Etienne's task was made even harder when they were reduced to 10 men midway through the first half when midfielder Jean-Eudes Aholou was shown a straight red card for a late challenge on Paredes.

Mbappe doubled the visitors' lead just before the break. Neymar sent the France international through on goal, and the striker made no mistake with a confident finish past Stephane Ruffier.