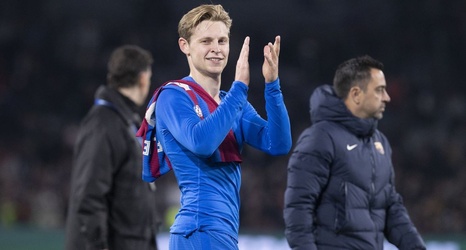 Frenkie de Jong’s future continues to make headlines with Chelsea the latest club to be linked with the Barcelona midfielder.

The Guardian are reporting the Blues are “monitoring developments” and could move for De Jong if his proposed deal to Manchester United falls through.

Reports this week have claimed Barca and United have agreed a fee for De Jong, but it’s not known if the Red Devils have managed to convince the midfielder to leave the Camp Nou.

De Jong has always made it clear he wants to stay at Barcelona and it’s been claimed that if he is to leave he wants a club who can offer Champions League football.