'Big mind, big character Giroud is forced to fight against everyone' - Deschamps hails Chelsea striker after four-goal masterclass against Sevilla 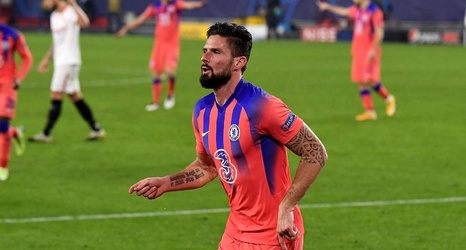 France coach Didier Deschamps has heaped praise on Olivier Giroud after his performance in Chelsea's 4-0 win against Sevilla in the Champions League on Wednesday.

Giroud broke Champions League records when he scored all of his side's goals as they secured first place in Group E.

The 34-year-old had not started a match for the Blues in either the Premier League or Champions League before the encounter in Seville and his national team boss was delighted to see him take his chance to impress.

"It's always important for attackers to score goals, whatever the match," he said at a press conference after Les Bleus were paired with Belgium in the Nations League semi-finals.