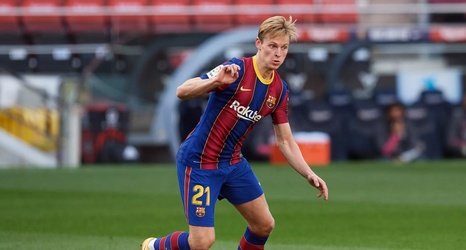 Frenkie de Jong has been talking about which position he feels most comfortable playing ahead of Barcelona’s Champions League clash with Juventus in Turin on Wednesday.

New boss Ronald Koeman has reverted to a 4-2-3-1 formation since replacing Quique Setien at the helm, using De Jong and Sergio Busquets as his double pivot.

It’s a system De Jong knows pretty well and he says he feel more comfortable playing there rather than in a more advanced position.

“I think in my nature as a player, I want to receive the ball early in the play and to set up the play.