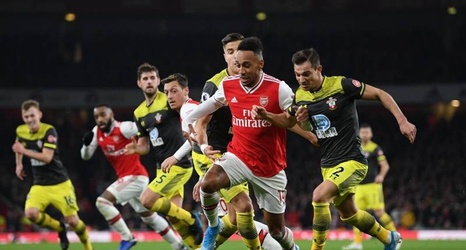 Arsenal and Southampton drew 2-2 on Saturday in the Premier League at the Emirates Stadium.

The Saints claimed a shock eighth-minute lead after Danny Ings fired home but Alexandre Lacazette levelled for the hosts after 18 minutes.

Southampton made it 2-1 with 19 minutes remaining after James Ward-Prowse rebounded home his own penalty when Bernd Leno saved from the spot. The video assistant referee had called a foul on Ings by Kieran Tierney in the box.

Arsenal appeared beaten in the final stages, with Southampton in control, but Lacazette netted a 96th-minute equaliser at the death.