World Cup Viewer's Guide: What To Watch For On July 1st 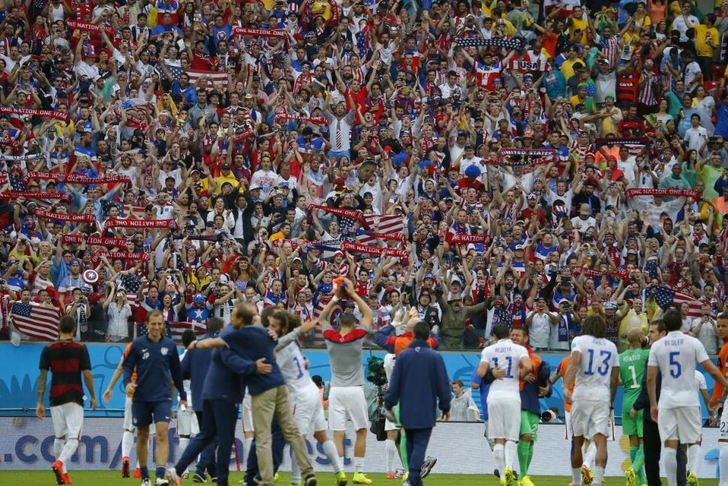 Two HUGE games on Tuesday - let's get straight to the action:

If you're considering skipping the early game to save your energy for USA-Belgium...don't do that.

Argentina has Lionel Messi, the best soccer player in the world and one of the few humans capable of conjuring goals like this out of thin air.

Switzerland has Xherdan Shaqiri, a fun-sized dynamo who scored a hat trick in his last game and owns  TWO of the World Cup's best nicknames - 'der Zauberzwerg' ('the Magic Dwarf') and 'der Kraftwürfel' ('the Power Cube').

Together, these teams are averaging over three and a half goals per game so far...so it's a safe bet that we're gonna see some fireworks.

Most of Switzerland's players won't get too adventurous out there- they made that mistake in their 5-2 thrashing against France last week, and they won't make it again. Instead, Shaqiri and forward Josip Drmic will look to bring down long passes up front and work together to cause mayhem in Argentina's defense.

The Argentines will do everything they can to make sure Messi runs the show, but winger Angel di Maria is worth keeping an eye on as well. In Argentina's final group game against Nigeria, Messi had relatively little room to operate, and di Maria capitalized by finding into open spaces where defenders busy tracking Messi should have been.

The Swiss are a spirited team with some exceptionally talented attacking players, but the mauling against France (their only top-tier opponent in almost a year) doesn't inspire much confidence. Argentina hasn't been convincing either, but they do have the ultimate trump card...Lionel Messi.

Here we go...after a narrow escape from the group stage, the United States earned a matchup with Group H winners Belgium. Despite having a population smaller than the Los Angeles Metropolitan Area and a delicious breakfast food as their national symbol (at least, as far as Americans are concerned), the Belgians have managed to put together one heck of a soccer team.

With 21-year-old forward Romelu Lukaku benched after a temper tantrum, 19-year-old Divock Origi will be leading the line for the Red Devils (no, really - that's their nickname). Tricky, inventive midfielder Eden Hazard will be charged with creating the chances (he's the one who looks like a Mountain West Conference punter), and Belgium will look to create holes in a not-quite-world-class American defense.

The Americans will welcome back forward Jozy Altidore, who left the USMNT's opening game against Ghana after 20 minutes with an injury. Altidore endured a miserable season with club team Sunderland, but looks like an entirely different player when he suits up in the stars and stripes. The United States will benefit from his strength up front, where he'll collect long passes and hold up the ball until other players can join the attack. Clint Dempsey has been the pulse of the American squad so far, and if the US pulls off the upset, it's a safe bet that he'll be heavily involved.

Belgium plays primarily through the middle of the field, which is a good omen for the Americans. When stretched wide, the United States is vulnerable, but when the team can stay compact and organized, they're capable of holding off even the most talented and creative teams.