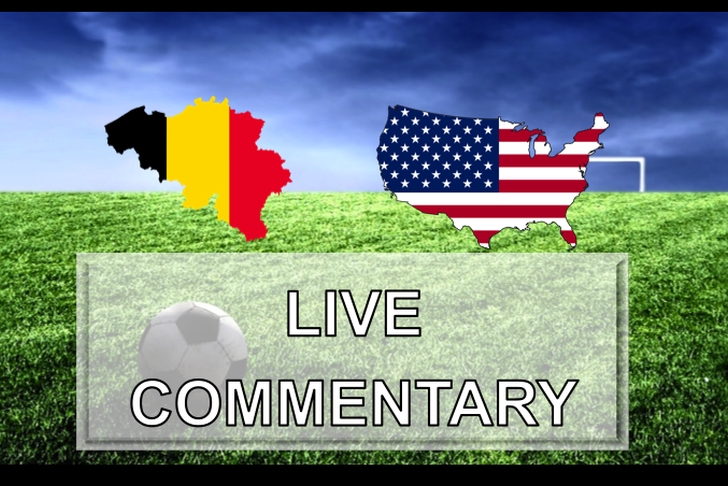 We're coming to you live from Arena Fonte Nova in Salvador, Brazil as the United States takes on Belgium in the World Cup's round of 16. We'll try to keep this fair and unbiased...but considering that we're all wearing red, white and blue, you shouldn't get your hopes up.

The United States starts with Geoff Cameron replacing Kyle Beckerman in the starting eleven, while Jozy Altidore remains out of the starting lineup as he recovers from a hamstring injury. Alejandro Bedoya also returns for the USMNT after sitting out the final game of the group stage against Germany.

120+1': That's all for this one. The United States goes out, but they can keep their heads held high. In our opinion, Tim Howard is still a viable presidential candidate in 2016.

120': Just one minute of stoppage time. Jurgen Klinsmann is not impressed, and neither are we.

117': Promising build-up play from the Americans, but Jermaine Jones hits it just over the bar.

114': Some last-gasp defending from Belgium as the United States suddenly looks threatening. Where was this during the first 110 minutes?

112': Julian Green has absolutely breathed life into the Americans. They win a free kick in a dangerous area...

108': JUST WIDE! Jermaine Jones flicks the ball inches past the post...this one isn't over yet.

106': JULIAN GREEN! Beautiful run and control from the 19-year-old, and the USMNT IS ALIVE.

105+2': Young forward Julian Green comes on for the Americans...too little, too late? Let's hope not.

104': Romelu Lukaku, who we really shouldn't have talked up like this, doubles Belgium's lead with a well-placed strike. Matt Besler really should have done better there, but he fails to track Lukaku's run and gets muscled off the ball.

102': Jermaine Jones takes a clearance directly to the face. Despite the laundry list of ailments he's racked up, he stays on.

99': Rough here as Jermaine Jones gets his ankle twisted in a way that ankles aren't supposed to twist. Is it time for Julian Green or Aron Johannsson?

95': More one-way traffic from Belgium as Tim Howard's goal stays under siege. Not a good look for the Americans.

92': Goal for Belgium. Sigh. Romelu Lukaku does some great work down the right (because of course he does) and Kevin De Bruyne slots it home. 0-1.

90+3': And we're headed to extra time. Romelu Lukaku comes on for Divock Origi...which is not a thing the Americans want to see. Lukaku is absolutely terrifying, and the only reason he didn't start today was his temper tantrum at the end of Belgium's last group game.

90+2': There it was...a beautiful ball falls directly to Chris Wondolowski in front of goal...and he skies it over. Let us never speak of it again.

87': ...but nothing comes of it. The Americans are TIRED, but they have one thing Belgium doesn't: Tim Freakin' Howard.

84': Tim Howard might not be able to win the 2016 presidential election, but he would DEFINITELY get at least 1/3 of the vote. Another incredible reflex save keeps the game level.

80': Finally, a breather for Tim Howard - DeAndre Yedlin goes blazing down the right and wins a throw-in.

78': We're going to have to give Tim Howard some kind of medal for this. We don't knight people in America, but whatever the Freedom-based equivalent of that is...

75': TIM HOWARD AGAIN! Mirallas is clear through on goal, but Tim Howard gets a toe on it and sends it behind for a corner.

72: Not a great game from Zusi...it'll be interesting to see if Wondolowski can get anything going up front.

71': Graham Zusi comes off for Chris Wondolowski...this has to mean we aren't seeing Jozy Altidore today.

68': An Axel Witsel shot blazes past the the crossbar once again - Tim Howard had it covered, but the Americans can't keep letting Belgium assert themselves like this.

67': A brilliant cross from Yedlin sails through the penalty area - the Americans need to start making runs into the box, or they'll never have a real chance here.

62': Better from the Americans, but a stellar clearance from Vincent Kompany gives Belgium yet another chance.

60': Miscommunication in the box ends a promising chance for the Americans - Michael Bradley is trying to get a little too cute.

59': Belgium is dominating possession here and looks very comfortable. A Dries Mertens shot is INCHES wide, and he makes way for substitute Kevin Mirallas soon after.

57': CLOSE FOR THE AMERICANS! A DaMarcus Beasley cross isn't cleared, and several Americans get a good look at it...but none are able to send it home.

56': Off the crossbar! A strong Divock Origi header looks like it'll fly over, but it comes much too close for comfort.

53': A very slow start to the half...until a cross somehow evades FOUR players (two Belgian, two American) to harmlessly sail out of the penalty area. A nervous moment for both teams.

50': A 'sultry evening on the coast of Brazil' says commentator Ian Darke...when Darke starts philosophizing, you know there isn't a whole lot going on on the field.

48': The Belgians are playing much wider, which suits them much better against the well-organized US defense. If they can stretch out American defenders and create space for Eden Hazard to work with, they'll have a much easier time.

46': We're back in Salvador, and the Belgians quickly win a corner after Tim Howard is forced into a tip save. Just like in the first half, nothing comes of it.

HALFTIME. Both teams have had real chances, but we're scoreless at the half. This one is still very much up for grabs.

45': Three minutes of added time at the end of the first half - Kevin De Bruyne manages to line up a shot on goal, but Tim Howard makes a comfortable save.

44: Corner kick to the Americans, who now look like they've recovered from Belgium's spell of dominance. DeAndre Yedlin does extremely well to recover and send a ball in, but Clint Dempsey is unable to reach it.

42': Great work so far from DaMarcus Beasley. Beasley wasn't expected to contribute much at this World Cup, but he's been excellent in this game.

40': Great cross from Yedlin, who has been terrific so far, but yet again there's no end product.

37': Belgium gets too tricky for their own good, and an attack breaks down. Belgian coach Marc Wilmots looks less than thrilled.

35': The United States is on the back foot, but defending well.

32': Yedlin wastes no time getting involved, winning a corner kick. Clint Dempsey does well to bring it down, but Jermaine Jones sends the ball fizzing past the left post.

31': That's a tough blow for the United States...Johnson has been one of the best Americans at the World Cup so far. Yedlin has his work cut out for him.

27': Belgium continues to press, and wins a corner kick on the left. The Americans clear, but the flood resumes shortly after.

25': DaMarcus Beasley saves the day with a HUGE last-gasp clearance. The Belgians are settling into the game, and are starting to look much more comfortable.

22': A bad giveaway in midfield by Graham Zusi leads to a golden chance for the Belgians...but Kevin De Bruyne scuffs it wide. A real relief for the Americans, who could easily have gone behind there.

21': Excellent from DaMarcus Beasley, who finds acres of open space down the left. Belgium seems determined to play through the middle, and the United States' pressing is keeping them from putting much together.

20': Chance for the Americans! Dempsey creates a beautiful move and gets a return ball in a perfect position from Michael Bradley...but his shot is straight at Belgian keeper Thibault Courtois.

19': Geoff Cameron's header is just too far out of Clint Dempsey's path...a real chance for the Americans that breaks down.

17': Geoff Cameron earns an early yellow card for a late tackle - he'll have to be very careful now.

17': Another promising move breaks down as Michael Bradley sends a pass astray. Not a good World Cup for Bradley so far.

15': Looks like a fan has decided to run out onto the field, delaying play for a few minutes while stewards track him down.

10': Cagey game so far - neither side able to control possession long enough to do something with it. Geoff Cameron gets sloppy in the box, conceding a corner kick.

6': Alejandro Bedoya tracks down a long ball behind the defense, but the Americans are ultimately unable to capitalize. Poor end product, but impressive possession and creativity from the US so far.

5': DaMarcus Beasley races down the left, but his cross sails over the goal out of bounds. Nice work going forward from the USMNT so far.

4': Michael Bradley wins the ball in a dangerous position, but an errant pass prevents the United States from counterattacking.

2': Belgium earns a corner after nice work from Kevin De Bruyne, but it's cleared comfortably.