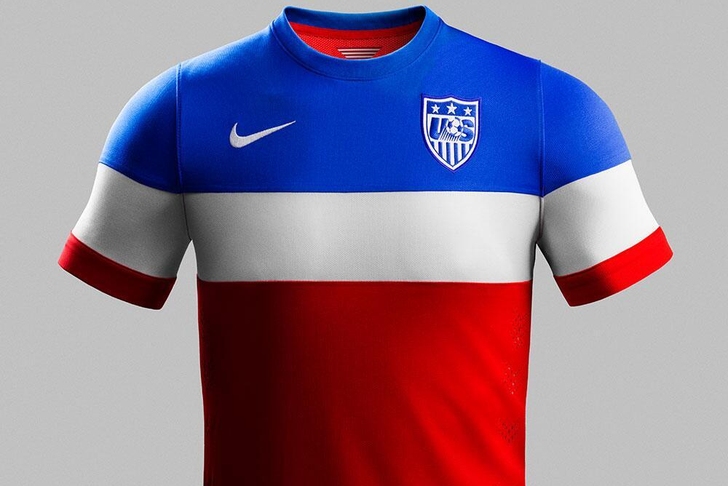 This morning, U.S. Soccer released the new away kit. It will debut tomorrow when the U.S. Men's National team plays Mexico in Glendale, Arizona.

The kit features a crew neck collar and three distinctive bands of colors found on the U.S. flag. Royal blue is around the collar followed by a band of white. A prominent red starts at mid-chest and is used throughout the rest of the jersey.

The socks and shorts of this kit are the same prominent red found as the base color of the jersey. They feature Nike's innovative laser vents that allow for breathability and comfort--both of which will be extremely helpful in the World Cup this summer in Brazil.

Similar to the new home kit released earlier this year, the 2014-2015 U.S. Soccer away kit is made using recyclable materials. The jersey, shorts--and for the first time in a National team kit, the socks--are made from plastic battles. On average, each kit contains about 18 recycled plastic battles, according to a news release on U.S. Soccer's website.

Fans from Facebook, Twitter and Instagram have been commenting on how much they dislike the new kit. But how would fans feel if we went back to the 1994 away jersey?

10 years later, is 2014 the year of the Firecracker Popsicle kit?

Kits can be bought and customized at ussoccerstore.com.