The Paris Saint-Germain starting 11 is absurd 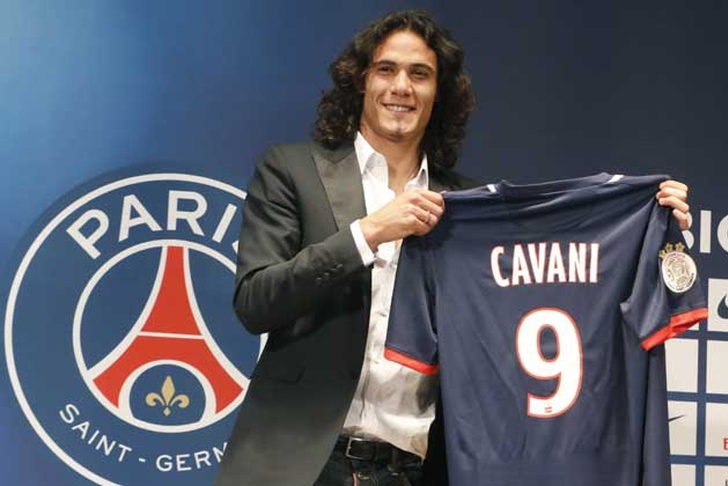 It's official. Thiago Silva is staying with Paris Saint-Germain after signing a five-year extension on Monday. This is good news for PSG, as Barcelona were heavily pursuing Silva (although it's also good news for Barcelona in a way, because PSG threatened to trigger Lionel Messi's buyout clause if Barcelona continued to pursue Silva).

[caption id="" align="alignright" width="259" caption="This is Ezequiel Lavezzi. He will be coming off the bench"]

Well here's how: last summer PSG bought Zlatan Ibrahimović for €21 million. A few weeks ago they bought Edinson Cavani for €57 million. There are exactly five me who have scored a total of 70 goals the last two seasons, and Ibrahimović and Cavani are two of them (as are Messi and Cristiano Ronaldo, so they don't really qualify as humans. The fifth is Radamel Falcao, so he barely counts).

Cavani (below-left) and Ibrahimović (right) become instantly the most talented and feared pair of forwards in the game. In fact, Cavani has been the most prolific goalscorer in the world not named Messi or Ronaldo in the last two seasons. Pair him with Ibrahimović, who is casually 6' 5" and one of the most physically dominant strikers in the world, and you have something very disturbing for all of PSG's foes.

Then look at their midfield. In the last two years, PSG has bought 20-year old Brazilian sensation Lucas €44 million, Javier Pastore for €42 million, Thiago Motta for €12 million and Blaise Matuidi for €8 million. Lucas is unproven, but outrageously talented. Pastore, Motta and Matuidi are as solid as they come, and it means something to the fans that Matuidi is French. Then add in the very real possibility that Ezequiel-freaking-Lavezzi could end up sliding down to play winger, and the thought of one of those players coming off the bench is formidable.

But what's really impressive, from a team perspective, is their defense. Thiago Silva, bought in 2011 for €40 million, remains one of the best in the world, as evidenced by Barcelona's interest in him. He is joined by an all-returning back line consisting of fellow Brazilians Alex and Maxwell, as well as frenchman Mamadou Sakho, who led PSG in minutes last year. There's also Marquinhos, a 19-year old up-and-coming Brazilian who could emerge as a real force by mid-season.

Of course, the French League 1 is trash, PSG topped the table by more than 10 points. But what PSG really wants is to be a major player in the UEFA Champions League. Ibrahimović and Cavani can certainly lead to that.