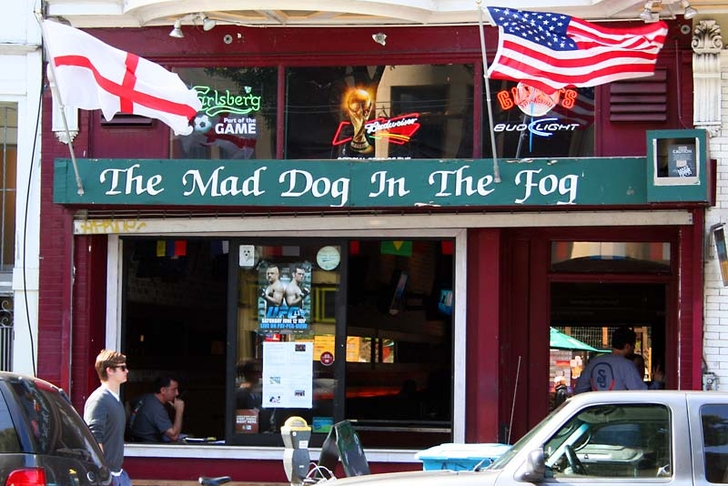 World Cup fever has hit San Francisco in full force - according to the latest TV ratings, SF is the second-most invested US city. While plenty of fans are watching at home, it definitely doesn't hurt that there are so many awesome sports bars where you can check out games...and we've picked out our favorites for those of you looking to watch in a more social setting.

If you haven't watched a game at the Golden Gate Tap Room yet, you need to fix that immediately.

With tons of seating, enough giant screens to make everyone happy and a world-class beer selection, these guys have a lot going for 'em.  Located just a few blocks away from Union Square, this is the place to be if you're looking for a place to watch near the middle of downtown.

We have a soft spot for these guys because they're just a few blocks from our office, and they've earned our loyalty with awesome service, a great beer selection and some killer drink specials.

Grab a pitcher, snag a table and go get your World Cup on.

We also picked these guys out as one of the best places to eat after a Giants game - with top-notch food and their own in-house brewery, this place is rocking 24/7.

Even though baseball is still a major priority for these guys, the World Cup is serious business - if the USA is playing, you better believe 21st will be packed with frenzied fans rocking the red, white & blue.

A die-hard soccer bar even when the World Cup isn't happening, Maggie McGarry's is great for hardcore soccer fans and newbies alike.

As Irish a pub as you'll find outside of the Isles, soccer is no mere game for the staff and regulars - it's a way of life. Important note: if anyone here asks you what your favorite (non-country) soccer team is, the correct answer is Arsenal.

Green's is a neighborhood staple, and you don't have to spend long here to understand why.

This is everything you want in a sports bar - plenty of televisions, plenty of seating, great service and a shockingly chill crowd. They're showing every single World Cup game here, and some of the specials are off the chain - if you're in the area, make sure to stop in and check it out.

This stylish restaurant & bar is in between the Marina, Russian Hill and Pac Heights - make sure to check it out if you're looking for a sports bar that also serves top-notch food.

We highly recommend the pizza & burgers, but you really can't go wrong at this place.

The bad: this place can get pretty cramped, and last time we stopped by, there was just one (well-positioned) TV. They might have amped up their viewing options for the World Cup, but if not, Chomp 'n Swig could get a little too cozy for some people.

This place just opened up recently, and we are ridiculously excited about 'em. A collaboration between the guys who run Kezar Pub (which you'll find a little further down this list) and the Corner Store (our favorite brunch spot in SF), this place has 28(!) TVs, tons of beers, and an awesome menu. To complete the "athletic club" vibe, the entire place is decked out like a high-class basketball gym.

Packed on the weekends, McTeague's chills out considerably during the day - an excellent spot for relaxed afternoon drinking, this is a great spot to order a pint and post up in front of a game. The staff here earns McTeague's bonus points, as they're about as laid-back as you'll find at a bar this popular.

On Polk right off of Bush street, this place is easily accessible from most places in the city.

Full disclosure: we absolutely love this place for after-hours shenanigans (with every bar game known to man, how can you not?), and we had it on the list even before we found out they don't open 'til 4pm during the week.

That might rule them out for weekday World Cup watching, but fortunately, they open up at noon on the weekends...and that's when most of you are gonna be out on the town anyway.

Bar None has been described as "a frat party with a liquor license", and the amount of fun you'll have here is directly linked to how you respond to that sentence.

For the World Cup, you probably won't be dealing with the usual crowd (for better or worse), and the screens-to-available-seating ratio is surprisingly solid. If you aren't interested in anything remotely fratty, there's an option just up the stairs that might be more your style.

"Wine, Whiskey & Sliders" is the mantra at Marengo, and we couldn't agree more with that philosophy. Watching the World Cup here is going to be much more relaxed and laid-back than it would be downstairs at Bar None, and the chances of blacking out and waking up somewhere in Fort Mason without your pants are also significantly lower.

Mad Dog in the Fog

Mad Dog in the Fog is on Haight street, but it isn't really on Haight street - the vibe is much more laid back, and as the sister bar of soccer mecca Kezar Pub (we're getting to them, don't worry), these guys know their (European) football.

With a giant screen in the back and plenty more sprinkled throughout the bar, Mad Dog in the Fog is an awesome place to catch a game, and for the World Cup, they'll be going all out.

One of the City's premier sports bars, Kezar Pub has been doing soccer right longer than most of these other spots have existed. The crowd runs a bit older than the other places on this list, but if you're looking to take in the World Cup with some fans who know their footy, Kezar Pub is for you.

Right across the street from Kezar field, this classic Irish pub will be going all out for the Cup. Don't miss it!