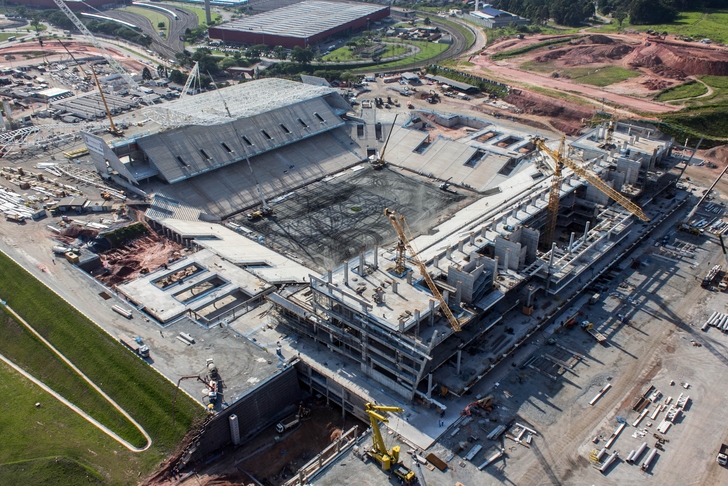 Construction officials confirm in an Associated Press release that the roof of Itaquerao in Sao Paulo will not be finished for the World Cup opening match. This venue will host five matches for this year's World Cup, including one of the semifinals.

Odebrecht, the construction company, says there isn't enough time to install the glass coverings on the stadium's roof. The work will be postponed until after the tournament, which ends July 13.

Odebrecht assures fans in the stadium they will be unaffected by the incomplete roof. However, it appears from photos that fans would be more protected from rainfall if the roof was in place.

In a statement to the Associated Press, the company stated that the glass covers will be installed after the World Cup because "transparency studies" were incomplete and were needed to ensure the roof would allow the proper amount of light needed to "preserve the pitch at good conditions."

The Itaquerao, also known as the Arena de Sao Paulo, is one of three stadiums that are delayed in construction ahead of the World Cup. Last year, two workers died after a crane collapsed that caused significant construction delays. This venue was expected to be ready by the end of last year.

Another worker died in March while installing the temporary seats to make room for additional fans. Labor officials halted construction, resulting in yet another delay.

With all of the setbacks, it will be interesting to see just how ready the stadium will be for the opening match between Brazil and Croatia on June 12.