Everything You Need To Know About World Cup Villain Luis Suarez 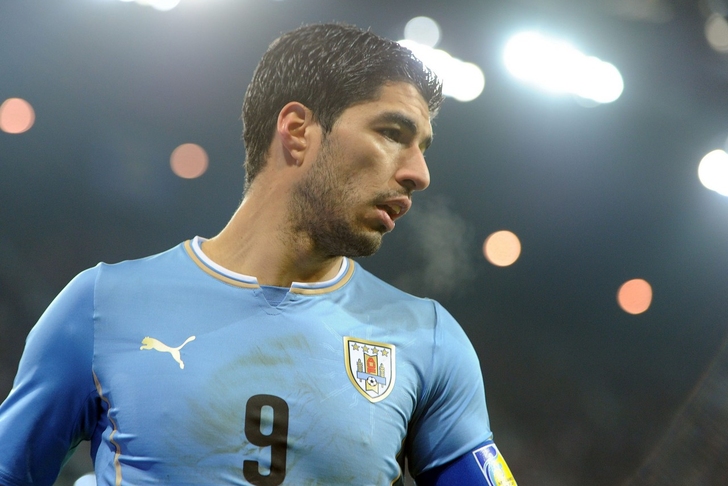 Luis Suarez found himself at the center of another World Cup controversy on Tuesday after sinking his teeth into Italian defender Giorgio Chellini. To get a more complete picture of the infamous Uruguayan cannibal, let's take a look back at the notable incidents that have defined his checkered career.

2001: Suarez, age 14, joins the youth team of Nacional, a club based in the Uruguayan capital of Montevideo.

2003: A 16-year-old Suarez headbutts a referee after receiving a red card in a youth game. After being caught partying late at night, a Nacional coach tells Suarez that he'll never play until he starts taking soccer more seriously.

2006-07: Suarez continues to score goals despite his discipline issues - in one five-game stretch in January 2007, he scores four goals but receives three yellow cards and a red.

Summer 2007: Dutch powerhouse Ajax tries to buy Suarez for €3.5m. Groningen declines to sell, but Suarez files a case with the Dutch league's arbitration committee to force the move. Suarez is denied by the court, but Ajax improves their offer to €7.5m and the deal is completed.

2007-08: Suarez excels for Ajax, but his discipline issues continue to frustrate fans & coaches alike. Suarez is briefly suspended after fighting with a teammate over who got to take a free kick. His eye for goal continues, and in 2008 Ajax names him their Player of the Year.

Summer 2010: Suarez, already on the radar of Europe's biggest teams, attains a new level of notoriety during the 2010 World Cup. With the score tied in a decisive knockout game against Ghana, Suarez intentionally blocks a goal-bound shot with his hand.

Suarez receives a red card, but celebrates in the tunnel as Ghana misses the ensuing penalty kick. Uruguay advances in overtime thanks to a penalty shootout, and Suarez is quoted in the post-game press conference as saying he "made the save of the tournament".

Suarez is unable to play in Uruguay's semi-final match against the Netherlands, which Uruguay loses 3-2.

November 2010: During a game against PSV in the Dutch League, Suarez bites opposing player Otman Bakkal. He receives a fine, a seven-game suspension, and is branded as "the Cannibal of Ajax" in the Dutch press.

Winter 2010: Soon after his suspension, Suarez is purchased by English club Liverpool for €26.5m. Suarez leaves Ajax having scored 111 goals in 159 games.

Spring 2011: After scoring in his Liverpool debut, Suarez starts his career in England with a successful half-season. The club had been languishing in 12th when he arrived, but finished the year 6th in the English Premier League.

October 2011: Suarez is found guilty of racially abusing an opponent (Manchester United's Patrice Evra) during a 1-1 draw. Suarez denies any wrongdoing, but is suspended for eight games.

December 2011: Suarez is suspended for an additional game for giving the middle finger to opposing fans during a 1-0 loss to Fulham.

February 2012: In Liverpool's first game against Manchester United since racial abuse claims were leveled against Suarez, he refuses to shake the hand of Patrice Evra during pregame handshakes. He (and Liverpool manager Kenny Dalglish) are eventually forced to apologize.

August 2012: Suarez, who continues to excel when not serving suspensions, signs a new long-term contract with Liverpool

April 2013: Suarez is caught on camera biting the arm of Chelsea player Branislav Ivanovic. The referee does not see the incident, and Suarez is not carded. Later, Ivanovic refuses to accept Suarez's apology, despite Suarez claiming otherwise. Charged with violent conduct and a ban of at least three games, Suarez argues that the three-game ban is sufficient, but ends up getting suspended for 10 games and fined an undisclosed amount.

August 6, 2013: Liverpool rejects a £40,000,001 bid for Suarez from Premier League club Arsenal. Suarez goes public with his desire to leave, after which Liverpool manager Brendan Rodgers describes his actions as "total disrespect".

August 14, 2013: Suarez changes his mind, claiming he now wants to stay. He apologizes to teammates, but not his manager.

2013-14: Suarez scores 31 goals in 33 games, and becomes the first non-European to win England's PFA Player of the Year award. He is also honored as the Premier League Player of the Season.

June 2014:In the 2014 World Cup, Suarez bites Italy's Giorgio Chiellini during Uruguay's final game in the group stage. Once again, the referee misses the incident, and Suarez stays on as Uruguay wins 2-1 to advance to the knockout round. FIFA officially charges Suarez, and he gets hit with a nine-match ban that forbids him from any soccer-related activity for four months.