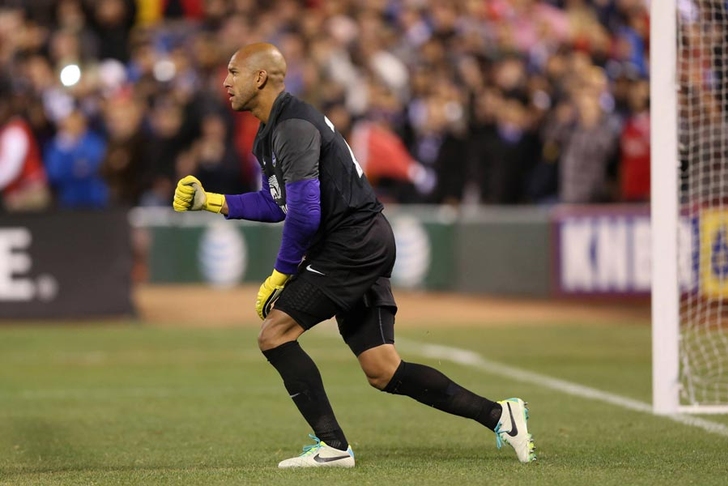 SAN FRANCISCO – In the mouth of the goal stood Everton’s Tim Howard, considered one of the top-five keepers in the world. Twelve yards away, standing over the penalty spot, was Juventus’ Andrea Pirlo, also one of the top-five in the world at his position. All Pirlo needed to do was score this penalty, and Juventus would have completed a come-from-behind victory in the first round of the International Champions Cup at AT&T Park in San Francisco.

A cheeky John Stones chip (video) and a Howard save later, Everton had won 6-5 on penalties.

“It was kinda funny to have a penalty shoot-out in pre-season,” said Howard after the game. “But it was fun, good for the fans. And I enjoyed it because I was on the winning end.”

Everton advances to the second round of the tournament on Saturday in Los Angeles, where they will face the winner of Real Madrid and the L.A. Galaxy, who play in Phoenix on Thursday. Juventus awaits the loser.

Kevin Mirallas was named the man of the match after his 61’ goal gave Everton a 1-0 lead (video). Midfielder Darron Gibson played him through off to the right, and Mirallas turned around Juventus left back Federico Peluso before punching it past backup keeper Marco Storari at the near post.

“It’s easier for me to go one-on-one than two-on-one,” said Mirallas in Spanish. “So when the ball was played I felt I had a good chance of getting a goal.” 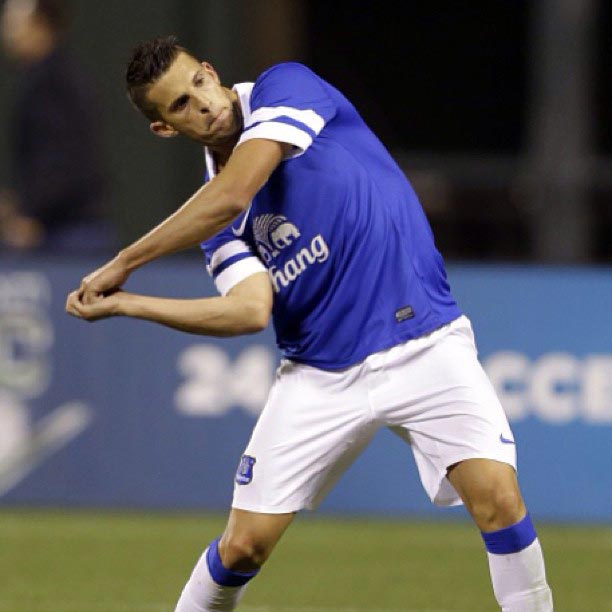 In honor of the game being played in a baseball stadium, Mirallas celebrated his goal with a mock swing, and then watched his “home run” sail over the fence.

“I’m not sure what I was thinking,” said Mirallas. “Just a feeling, just a thought in my head. Because we were playing in a baseball stadium.”

Joked Howard, “Leave it to Kevin for the dramatics. But it was fitting and it was fun.”

Everton were in control for most of the game, acting as the aggressors for the majority of the first hour. Yet it was Juventus who generated the better chances. Midfielder Luca Marrone missed a wide-open tap in volley on the back post just before the half hour mark.

In the second half, Howard made a fantastic diving save on an equally fantastic free kick by Arturo Vidal to keep Juventus off the board, and moments later Mirallas had scored.

Pirlo subbed on for the Italians in the 71’, and the game changed. Howard made a series of quality saves on a frantic scramble in the Everton box, including a diving stop on a low curler by Carlos Tevez, with chants of “USA” coming from the American audience and Everton supporters as well.

But Howard couldn’t keep the Italians out forever. Moments later the ball bounded out to Kwadwo Asamoah just inside the 18 and off slightly to the left. He fired an absolute rocket towards the far post with the outside of his left foot, and Howard had no chance as the ball curved into the net to tie the game at one and send it to penalties.

Leon Osman saw his first penalty for Everton saved by Storari, and the teams traded makes until Pirlo - of all people - missed the game-winner.

While “The Architect” Pirlo started on the bench and goalie Gianluigi Buffon did not play, Juventus put out all three of their offseason signees in the starting 11 in defender Angelo Ogbonna and strikers Carlos Tevez and Fernando Llorente, as well as mainstays Asamoah, Federico Peluso and Arturo Vidal. Alessandro Matri and Mirko Vucinic also saw action for a Juventus side many are tabbing to make a strong run in the UEFA Champions League.

Everton put out what is expected to be their top side, with the exception perhaps of Nikica Jelavic at forward. Even left back Leighton Baines, nursing some leg pain, played for over an hour.

It may still be preseason, but the regular season for both clubs starts in just over three weeks. They’re getting serious.