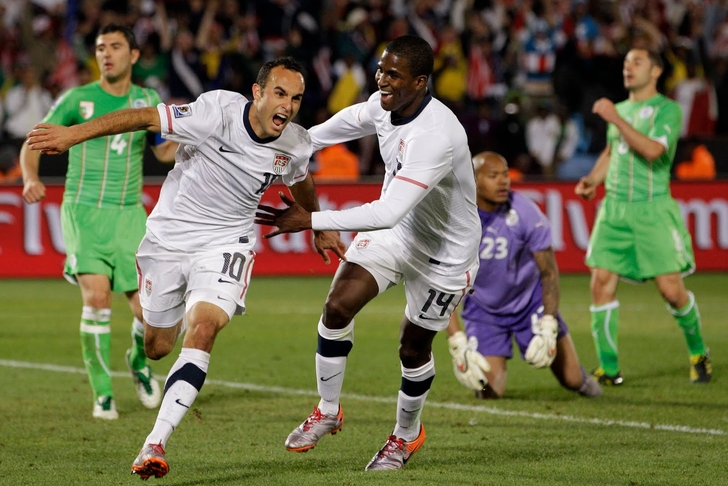 Landon Donovan, one of the most celebrated players in the history of American soccer, celebrates his 32nd birthday today. This Ontario, Calif. native prides himself in the fact that although he wasn't given many opportunities, he took advantage of them and made something of himself.

For American soccer fans, we certainly appreciate the fact that he did. Donovan was accepted into the inaugural class of the U.S. Soccer residency program in Bradenton, Florida in 1997. From there, he earned a spot on the U.S. Under-17 National Team and was named player of the tournament in the U.S.'s fourth place finish in the 1999 FIFA U-17 World Championship.

Donovan began his club career at 17 with Bayer Leverkusen in Germany's Bundesliga. He was loaned to the San Jose Earthquakes for the majority of his time with Leverkusen, eventually leading to his release and transfer to the Los Angeles Galaxy just before the 2005 Major League Soccer season began.

It was in Los Angeles that Donovan's career really took off. He scored 12 goals and had 10 assists that season, and added four more goals and one assist during the Galaxy's run in the MLS Cup. Donovan's outstanding performances led to his club's third championship.

After a few more successful seasons in L.A., Donovan took his talents overseas to Everton, joining U.S. Men's National team goalie Tim Howard in the English Premier League during the 2010 season. Donovan, although he was only a loanee, was still a fan favorite--the crowd could constantly be heard chanting "U-S-A! U-S-A!" during substitutions.

Currently, Donovan is back with the L.A. Galaxy. He took a short, self-imposed break in late 2012 after the Galaxy won their second-straight MLS Cup. Donovan cited exhaustion, both physical and mental, as his reason for taking time off. He returned in March 2013.

Donovan's international career has also been a success. The all-time leader in scoring and assists for the U.S. Men's National Team, Donovan has scored 57 goals and served up 58 assists in 155 appearances for the national side. He has played in three World Cups, with his most memorable tournament being South Africa in 2010. Donovan scored one of the greatest goals in U.S. history against Algeria in the 91st minute - his monumental finish allowed the U.S. to advance from group play into the knockout round.

The U.S. MNT's appearance in Brazil this summer will likely be Donovan's last World Cup. His legacy will be hard to match.

In honor of his birthday, here is a compilation of some of Donovan's best moments: